Without a trace of irony East Sussex County Council has heralded a huge spike in its collection of post-Christmas household waste as a triumph of environmental protection: 4,695 tonnes of recycling – “the weight of 783 African elephants” – is reported to have been processed from kerbside collections last month, “beating the previous best set last year by 111 tonnes”.

Monthly recycling tonnage, usually in the region of 3,800 tonnes, always surges in January as people dispose of items such as Christmas cards, wrapping paper, cardboard, drinks cans and recyclable glass and plastic bottles.

Cllr Claire Dowling, county council lead member for transport and environment, said: “It’s great to see people in East Sussex making the effort to recycle so much of their post-Christmas waste.

“Every item that is placed in recycling bins helps us to reduce even further the amount of waste which goes to landfill or is incinerated for energy, shrinking our carbon footprint and helping the planet.”

Or would the planet be helped even further if less of this mostly superfluous packaging was produced in the first place?

Cllr Dowling’s good news roll-out extended further last week with her salute for the county’s “highways heroes…battling through the elements to keep the county’s roads safe and keep traffic moving”. Crews from

East Sussex Highways have apparently “fixed” more than 11,000 potholes since November – three times the number of the previous winter.

The council claims that all of the county’s 2,000 miles of highway are inspected every month, six months or 12 months depending on the type of road, that potholes are assessed according to the depth, width and location of the hole, volume and traffic and speed limit, and that the most serious are fixed “within two hours”, with others “which meet the criteria for repair” being dealt with within five days or 28 days.

Cllr Dowling enthused: “Our highways crews are out and about every day, often in horrendous weather, doing a heroic job of dealing with flooding, fixing potholes and ensuring roads remain open.

“Every pothole report we receive will be checked out and if it meets our criteria for repair, people should be assured we will get to it and we will fix it.”

Drivers, cyclists and pedestrians of Hastings alike may surely wonder what the criteria are that don’t seem to apply to the roads of their town. They might also question whether, even giving due allowance for the deluges of rainfall this winter, the road surfaces can have been properly laid in the first place.

• Potholes or any other issues on county roads should be reported via the East Sussex Highways website at www.eastsussexhighways.com

For more upbeat PR on the state of our county, look no further than the announcement last week by Natural England of their plans to build “a new coastal path between Eastbourne Pier and Camber Sands… to improve access along the East Sussex coast”. Public consultation is now in process and runs until 23rd April.

Casual inspection of an ordnance survey map confirms that there are already public rights of way along virtually the whole of this coastline, the only serious obstacle being the Rother river mouth at Rye Harbour, which will unfortunately remain un-crossable (the route will still double-back to the Strand Quay in the town centre). But, as walkers – and readers of this newspaper – will know, the main footpath through Hastings country park has been blocked off for several years because of landslides at Ecclesbourne Glen and an effective refusal by East Sussex County Council to adopt measures that might stabilise the soil sufficiently to get it re-opened.

Cllr Dowling (she again) has issued a press release welcoming “anything which makes it easier for people of all abilities to enjoy our coastal walks now and in the future” and encouraging “those who have an interest” to take part in the consultation. Members of the battling pressure group SEG (Save Ecclesbourne Glen) may be less than impressed. 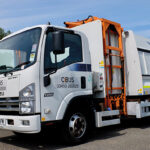 Cibus Waste from Food to Fuel