Diners have one last opportunity to enjoy a discounted meal under the government’s Eat Out To Help Out scheme this bank holiday Monday (31st August).

Scores of eateries in the Hastings area signed up to the scheme, which has run on Mondays, Tuesdays and Wednesdays throughout August, offering a 50 per cent discount of up to £10.00 per person on meals eaten in. Businesses have hailed it a success with some seeing queues of people waiting for tables.

Momirur Rahman, manager of Ocean Spice at White Rock, said it had brought people into the restaurant on what would normally be quiet days and reduced the number of takeaway orders on these days. The restaurant has hired more staff as a result.

“It has made our Monday, Tuesday and Wednesdays the new weekend, as we like to call it,” he said.

Nationwide, in the first two weeks, 35 million half-price meals were reported as eaten out, with 48,000 of the 85,000 outlets taking part claiming back £180 million of reimbursements for the discounts. Businesses have been able to claim weekly, simply by informing the government how many diners they’ve served and the total discount provided. Their claim is processed and money paid back into their account in five days.

It’s a system which could be open to abuse, said Jason Prior, co-owner of the Albion.  “They don’t want to see any receipts, they don’t want any facts or figures.”

However, the scheme appears to have encouraged people back into restaurants, pubs and cafés, which were able to reopen on 4th July, and attracted customers, especially families, who would not normally go out to eat.

“It’s been really good but really hard work,” said Jason. “Monday to Wednesday we’re packed, and we’re turning people away. But it’s having a knock-on effect in that Thursdays and Fridays are a lot quieter.”

As a result, the Albion has served food to as many customers as it did last August but, like many pubs, it is taking far less in alcohol sales, due to limits on customer numbers and losing live entertainment.

“In many ways, August wasn’t the month we needed it,” said Jason.

“But it’s enabled us to stay in the black and, with all the staff off furlough now, it’s enabled me to keep everyone employed and working the hours they previously had,” he added.

But it does not look likely that Chancellor Rishi Sunak will extend the scheme past next Monday despite pressure from industry lobby groups. This may come as a disappointment to some business owners in Hastings who expect a notable drop in trade come the autumn and winter.

Albion Hastings, Eat Out to Help Out, Ocean Spice 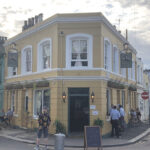 ‘Eat Out to Help Out’ Now Live