Anna Campbell, aged 26 from Lewes, was killed when a Turkish missile hit the convoy she was travelling with in Afrin on 15 March. Anna was one of several hundred international volunteers who have joined the mainly Kurdish People’s Protection Units in their fight against Isis and in their efforts to build a radical direct democracy in Rojava, and she volunteered to be sent to the Afrin front when Turkey’s air and ground offensive was launched in January. Afrin, a city and canton within one of three self-governing regions which make up Rojava, Northern Syria, has since fallen to Turkish forces. 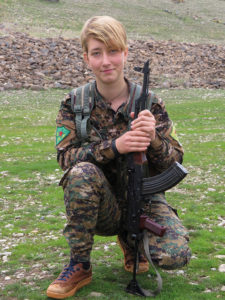 Anna was educated at the New School in Lewes, a progressive educational school run on human-centred, holistic principles. She later attended the University of Sheffield but felt dissatisfied with academia and went on to train as a blacksmith and then as a plumber. Her father recalls her compassion and courage from childhood: ‘’I remember when she was 11, she protected a bumblebee from being tormented by other kids at school. She did it with such strength of will that they ridiculed her. But she didn’t care. She was absolutely single-minded when it came to what she believed in.”

Anna, who was involved in migrant rights, animal rights, anti-fascism and environmental activism in the UK, became interested in the Kurdish cause after reading about the attempts to build a feminist, socialist society in Rojava, and in May last year made the decision to travel to the Kurdish autonomous region to join the revolution. Whilst in Rojava, she was involved with the Movement for a Democratic Society (Tev-Dem), which governs the region through a system of ‘communes’, built around the principles of direct democracy, socialism, gender equality and ethnic minority rights. Anna worked with the international commune, which aims to educate foreigners about this way of social organisation through direct involvement. Anna also joined one of the YPJ units, all-female fighting brigades, and took part in the fight against Isis, which saw the so-called Islamic State driven out of Kurdish Rojava, and then out of the Arab-majority cities of Manbij and Raqqa. She pleaded to be allowed to volunteer for the defence of Afrin when the Turkish attack began in January.

Rojava has been probably the only beacon of hope to emerge from the chaos of the Syrian civil war and is without doubt the most successful radical experiment in socialism and direct democracy in the world today. Yet Turkey under President Erdogan has ramped up its clampdown on the Kurdish demand for autonomy within its own borders, and appears alarmed by the prospect of Rojava inspiring others in their struggles. The attack on Afrin has been condemned around the world as a unilateral act of aggression. It is now feared that Turkish troops will attempt to press on further into Manbij.

Alexander Norton, who also fought alongside the Kurds in Rojava, paid Anna this tribute: ‘’To live as she did, a lifelong militant of anti-fascist and
animal rights struggles, to graduate to the armed struggle against fascism and patriarchy, means her death was no
tragedy. A car crash is a tragedy. To die in the service of her cause, for the equality of all, was the heroic statement of who she really was.’’

• You can read more about Anna Campbell and Rojava here

« Art on the Allotment
Royal Delicacies »