The future of a valuable publicly owned asset in the heart of the Ore Valley has been cast into doubt after the company in charge of its future regeneration, Sea Change Sussex, breached their own constitution by selling it without consulting with representatives of three local councils. The land to the south of Clement Hill Road, formerly the Stills Factory site, had lain vacant since the factory was demolished.

In the early 2000s and had been under the control of Sea Change, a private company set up to help deliver millions of pounds worth of publicly funded regeneration projects. In documents obtained by HIP it states clearly that any sale of the assets must be supported by representatives of Hastings Borough Council, Rother District Council and East Sussex County Council. Despite this it appears that the land was sold recently against the wishes of the leader of Hastings Borough Council, anit’s rumoured to have gone for three times it’s estimated value. The buyer has been revealed through public documents to be Gemselect, a private developer based in Battle. At present it’s not clear what their intentions for the site may be but local residents and campaigners are concerned that it may be left derelict and “landbanked” until such time as a commercial housing development becomes viable, and that the proceeds from thdwValley and spent elsewhere in Sussex on “regeneration” projects with dubious social benefit.

However, campaigners have long maintained that this also allows them to operate without the high scrutiny and public accountability, which would normally accompany the delivery of such large-scale public/private investments and assets. A number of the company’s “legacy projects” have delivered questionable levels of regeneration , with the number of jobs and houses created falling far short of their own projected targets. Over the years projects begun by Sea Change or it’s predecessor Seaspace have included the Lacuna Place development on Havelock Road, which despite having been sold  to the University of Brighton last  year has remained completely empty since work was finished on it over 7 years ago. Other projects include the on  Enviro21 Business Park  Queensway which promised 500 jobs, but two years after completion had only managed to deliver 25, and the housing development behind Station Plaza, which has been delayed by 9 years and recently, owing to changes in legislation, has had its affordable housing constraints removed, likely meaning any housing built will be out of reach of most local residents who so desperately need affordable, good quality housing. A lot of the land in the Ore Valley was earmarked for regeneration as part of a programme labelled Millennium Communities, with the original plan being to demolish a lot of  housing around the Broomgrove Estate and to build 650+ affordable houses in the the Ore Valley, with a focus on sustainability and high design standards. At the time a factsheet released by English Partnerships, (formerly the Homes and Communities Agency), stated; “The Hastings Millennium Community will span six sites, joined by a proposed metro link, and will include the creation of a new Country Park. These sites cover an area of 130 hectares (320 acres), currently including such uses as housing, public open space and a former railway station and goods yard. The scheme will be developed in conjunction with Hastings Borough Council and SEEDA.” Whilst some of this was realised it seems the majority of the promised regeneration has failed to materialise, particularly in the Ore Valley.

The Stills site lies adjacent to another valuable piece of land which, by contrast, is seeing an altogether different approach to regeneration being trialed.  The Heart of Hastings Community Land Trust were recently granted a licence to operate on the former Broomgrove Power Station site for 18 months, during which time they aim to engage with local residents and organisations to discover what people locally want to see done with the site. The Land Trust are aiming to develop housing on the site eventually, but as a Land Trust they aren’t bound by obligations to deliver huge dividends to their shareholders and as such are not aiming to make huge profits. Any minor profits they do generate will be reinvested back into the maintenance and upkeep of the housing, and any other projects which eventually operate on the site. So far a number of temporary, community-focused voluntary projects have sprung up, with plans afoot for a community garden, as well as a project teaching children and young adults from the surrounding areas basic car mechanics and then allowing them to take that learning into building a banger racer which they’ll be able to take to Arlington Speedway. The members of the Land Trust are hoping that this style of ‘bottom up’ development, starting with people rather than plans, can prove successful and be used as a model for future regeneration efforts around the UK. 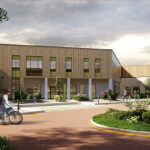