In a parliamentary session last week, Hastings & Rye MP Sally-Ann Hart challenged Matt Warman, the under-secretary of state at the Department of Digital, Culture, Media and Sport (DCMS), to confirm that rural villages on the edge of urban centres would not lose out in the race for fast digital connectivity via fibre broadband. She instanced Three Oaks, which nestles off the A259 between Guestling and Westfield, as a case in point.

Mr Warman replied with a pledge that “no part of the country” – urban or rural – would be “left behind” in the roll-out of gigabit broadband, and that
he was “happy to discuss…in person” the villages she referred to. Three Oaks could thus become a litmus test for the government’s commitment to universal provision.

The DCMS policy is to allow the private market to develop high-speed broadband in towns and cities where there is sufficient density of housing and/or offices to spread the costs of replacing or supplementing old copper-based cables with a new fibre network. Mr Warman claimed in response to Mrs Hart that around 40% of UK premises can already access gigabit broadband on this basis, and that this proportion is expected to rise to 60% by the end of this year. However, the DCMS is also committed to ensuring that rural communities should not lose out, and in March 2018 set up a £5bn scheme, Project Gigabit, under which consumers in more disparately spaced locations are offered vouchers to defray the costs of laying cables. Three Oaks, like other similar villages in Rother district, has been eligible under this scheme hitherto despite its proximity to the urban borough of Hastings, which can readily attract commercial providers. Will it remain so? Mr Warman did not specifically pledge this, but insisted that the voucher scheme was flexible enough to ensure that such locations would not lose out.

Whatever assurances the minister may give, the economic reality is that installation in rural areas is and will remain demand-led. Broadband providers will undertake their own surveys of urban areas so as to establish where there may be sufficient demand to lay cables on a commercially viable basis. On the other hand, even if they are entitled to voucher assistance, would-be consumers of fibre broadband in rural areas need
to group together in partnership to achieve economies of scale
that will reach commercial equivalence.

It seems nevertheless that, both in town and country, there has never been a better time to upgrade to fibre.  While the UK lags far behind most European economies in the installation of the technology, this has its own advantages: British companies can import skills and manpower which have been developed in Europe and are now available to be applied here with maximum efficiency. 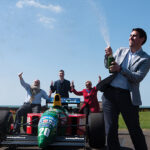