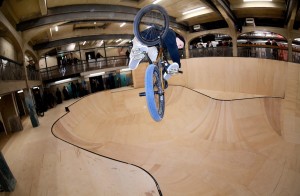 To attend the opening of the skatepark I had to park on the promenade (well, “had to” might not be entirely true). A small Hastings goal of mine achieved, cheekily grinning at the promenaders, who didn’t approve, and me wondering whether the Mayor was allowed to do this? I climbed through the barrier, as clumsily and purposefully as I could, in order to attract the most attention and signal, again, to the promenaders, that I was allowed and yes, a very, very important person.

The first thing that struck me, like a subterranean dream, was the floor. The checked beige and cream floor! The memories of excitedly descending into the slightly macabre ice rink, filled me with joy and childhood. Irresponsible times. Picking up your boots, full of promise, the lumpy bumpy ice, the blisters, bashing into the sides and then laughing, the damp smell, the slight regurgitation of sweets when you fell and the rubbish red plastic seats in what was ostentatiously described as “the cafe”.

“We’ve kept the changing rooms as the changing rooms”. Wow, another wave of feeling, the changing rooms that you didn’t want to be left alone in, where you scrabbled to do your laces up, or apprehensively slide your boot off to reveal the damage, hoping the skin didn’t come off your heel when you had to do the last tug. I loved going to the ice-rink and I couldn’t wait to see the skate park.

It is truly awesome. I say that with no sardonic nod to Bill and Ted or Point Break but with total integrity. I can’t remember when the ice rink shut. I think I’d moved away from penny sweets and onto slightly stronger poisons but skating and bmx-ing became a big part of life in Hastings. Bagged myself a skateboarder, Backyard Jams became the highlight of the year and Hastings became a Mecca for skate and BMX. It very strongly added to Hastings being an excellent place to be a teenager. Yes, that’s right, I enjoyed being a teenager.

You enter the main hall, straight onto the viewing gallery and sunk beneath you are huge, bendy, skate bowls with added ramps and edges. It’s a skater’s dream. The  Victorian surroundings only add to the first impressive impression. The colonnades and arches, when it was an ice rink, were just the pillars that you clung on to, laughing, trying to stop yourself inadvertently doing the splits. Now they are the framework of a very cool, grand building.

The other side of the park is the training area, with vert ramps, slide rails and flat banks. There’s also a ramp that you drop into from the other side of the room, go through a tunnel and pop out into a foam pit. Too much fun. At some point they hope to put a disco ball and lights in the tunnel to add to your experience. Oh yes. This place is all about joy. My free wheeling, son of a BMX pro, three year old nephew, couldn’t recreate a better scene, with all his plastic finger boarding gear.

Whether you are new to skating and bmx-ing, and would like to learn, or you’re already broken-in, or would like to sit and watch all the tricks and slams by pro-riders from around the world, or buy the gear, with no idea. It’s all here for you. I have my own, slightly more seedy, subdivision for patronage.

So I say “S’up” and “Big Up” to Source and the Moore brothers and also HBC. What a fantastic £1.25 million investment into Hastings and many demographics who get shunted aside and how lucky are to get this world-class facility. 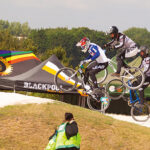 « All aboard! The Alexandra Park railway is back
Local author hammers home message of peace »