Along with millions of others I subscribe to a Kings College Covid App which invites you to log your health status on a daily basis – they do research into Covid symptoms.

A few days ago I woke up feeling dizzy, probably triggered by sinusitis, which is quite bad at the moment. As well as light-headed, I felt sick and my stomach was upset. I told the App how I felt. Next thing I knew, they’d emailed, asking me to get a Covid test.

I googled it all up and there appeared to be some obscure and rare Covid strain that starts with those symptoms… Now look, according to the statistics, Hastings has one of the lowest Covid infection rates in the country. It seemed exceptionally unlikely that a new Covid strain had somehow arrived here, but nevertheless I thought I’d go for it.

All test business seems to be done online. To navigate the system, you need to be internet-savvy, and, ideally, have a smart phone. I presume there is some steam-driven pigeon-post thing for Internet backwoodspersons, but I would doubt its efficiency.

Given that, as far as I knew, the nearest testing places were Ashford or Brighton, I first ordered up a home kit from the Government website.

The site kept asking me if I had ‘symptoms’ but by that it only meant the traditional fever, cough etc. By ticking ‘no’ I just felt a fraud, but if I said ‘yes’ the system immediately flew into a frenzy wanting me to dial 111 etc. So ‘no’ it had to be. If I hadn’t been told to persist by the Kings app, I would have given up at that point. This fixation with formal symptoms must mean that many people miss out…

You are supposed to swab and mop round and behind your tonsils and uvula without touching teeth, gums or tongue

Because I said ‘no’, I didn’t get the formal instructions to self-isolate etc. However, we decided to be sensible until I got the results. Garden drinks were cancelled and, dammit, we didn’t even go to the newly-opened shops.

My kit was delivered a day later by Amazon, along with a big fat instruction book. On receipt, you had to first register it on-line, quoting a long reference number, then book a courier to collect it. You can only do the test either after 9pm the day before the courier comes, or before 8 am on the day – the swab only lasts 48 hours. Many swab samples must run out of time.

I found the actual task impossible. You are supposed to swab and mop round and behind your tonsils and uvula without touching teeth, gums or tongue. When I opened my mouth, I couldn’t see far enough down my throat. Even with Nick, my husband, shining a torch down I still couldn’t.  No way could I have got a proper sample.

Just for interest, I looked in Nick’s mouth. The relevant structures were more visible, and he seemed to have more space in there. In case it was just us, I googled up comparative space in men’s and women’s mouths and, yes, men have larger mouth cavities. I also read that jaws get less mobile with age. Perish even having the thought, but could this test have been designed using younger male mouths as the model?

Even if you could have found your tonsils, there was other complicated flim-flam to comprehend about sanitising surfaces, washing hands, blowing noses, snapping off swabs, packing up and labelling the sample.

Is it surprising that up to half of postal kits are not returned, despite all those sent out being counted in the Government’s daily testing figures?

I went back to the Government site and reapplied, this time to visit a test centre. Nick said he’d noticed a little piece in the Observer that said there was a new site in Bexhill, though it implied it was only for residents of Bexhill and Battle. There was no other publicity for it at all. However, I applied, and was offered a test there straightaway.

The test centre is hidden away in a little car park on an industrial estate. A bloke in a mask welcomed us, and checked my ‘pass’ via my iPhone. Then, we drove up to a little gazebo under which huddled a trio of nurse-type ladies in plastic aprons, sitting in garden chairs, drinking tea and nattering. We could only see one other car. As we drew up beside the gazebo, one of the three passed us a familiar-looking envelope. “Here you are, pet, the instructions are all inside.”

“Am I expected to do the test myself?”

“That’s right, love. Seal it up and pop it in the white bin over there when you’ve finished.”

“But hang on, I’m only here because I couldn’t manage the home kit”.

She looked at me kindly, but faintly pityingly, as if I was either demented or deformed, or both. ’Oh dear then, lovey, don’t you worry, park over there, and someone will come to you.’

Eventually, one struggled into her PPE and trundled over to us. The actual swabbing wasn’t bad – a bit retchy down the throat and sneezy up the nose. I still had to pack up my sample myself in various pots, label it, seal it up and then register it on-line. Meanwhile, a woman in the other car shouted across that she couldn’t do her test. My helper rolled her eyes. “You’ll have to wait a few minutes, love. It’ll mean another new test kit, and I’ll have to get changed…”

It must be so difficult sitting in a dark, cramped car with just the visor mirror, no proper surface, no hand washing… and what if you were actually ill? Many people must just botch it and don’t say anything. How many tests are done incorrectly? One report suggests up to 8,000 a day are rejected as ‘unclear’, never mind false positive or negative results…

However, it is indeed true that anyone can apply for and have a test, even if you say ‘no’ to symptoms. I can only speak for the site in Bexhill, but there was so much capacity I could have had my test within half an hour of applying. The staff at the site were friendly and cheerful, though they clearly did not expect to actually have to… er… do anything.

On a positive note, I got the result via email within 48 hours. No Covid, as expected. And by the way, I feel perfectly well now. 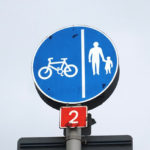 « Calling all BAME writers and artists
Politikal Pokes By Lobbytroll »