“I would vote Green, but you don’t stand a chance”. Green party canvassers have heard this response on doorsteps so many times in past elections, both national and local. Those out and about in Hastings should hear it rather less in future, though; or if they do, they will have a ready answer. Julia Hilton is now one of four Green councillors on East Sussex County Council following her poll victory in Old Hastings & Tressell ward last Thursday. She will also take her place on Hastings Borough Council, breaking the duopoly of Labour and Tories there, after winning the Old Hastings seat with more than double the vote of the Labour party runner-up.

It has taken a little time. Ms Hilton has lived in the town for 14 years, running her own business as landscape architect. She had no previous political affiliation, but became co-ordinator for the Green party in 2015 and stood as a candidate in 2016 without considering that she had a realistic chance of being elected (she hadn’t).

What boosted the party profile was the proposal floated by a development company the following year to build a multi-million pound marina complex off Rock-a-Nore. This hare-brained scheme, commercially improbable and a potential environmental disaster, attracted initially favourable comments from mainstream politicians of the time – both local Labour leader Peter Chowney and Tory MP/government minister Amber Rudd. It was Ms Hilton and the Greens who led a sustained campaign to oppose it.

By the 2018 borough council election the marina idea was more or less dead and buried, but the Greens were able to remind local voters of their active role in its demise, and Ms Hilton came within 29 votes of claiming one of the two Old Hastings seats at issue. Last Thursday, three years on and buoyed by a team effort which involved almost every candidate across the borough and many other volunteers putting in time to canvass in this ward, she won her thumping victories.

She is keen to emphasise, however, that in this campaign she and her party were making a positive pitch. “I was not at all negative about Labour,” she says. “On the contrary I put it to voters in the ward that they already had a Labour member (James Bacon) with whom I would work in harmony. This was their chance, though, to get a second voice who would engage with them on key issues when the council did not.”

She points out that some broad ideas which originated in the Green party, such as a green economic deal and the introduction of universal basic income, have gained traction with many in the Labour movement. Whether the current Starmer leadership is continuing in that direction is not clear, but she feels it important to work in a co-operative spirit, and believes that the broad cross-party alliance which exercises power in neighbouring Rother District is working well.

At County Hall in Lewes Ms Hilton will be joining up with her fellow Greens to form a party bloc. Although the Conservatives have retained their overall control, she expects that Greens will be invited onto committee posts where some influence can be exerted. At Muriel Matters House in Hastings she will be on her own, facing a Labour majority that has shown itself inclined to maintain disciplined unity against any opposition. How can she affect any change there?

Ms Hilton says that she has already learnt ways of getting things done as an activist outsider. Now she believes she can get herself better informed on the inside. She will have greater access to council officers.  She can share experience with Greens elected onto other councils across the country.

“All the other councillors, both Labour and Tory, are ‘whipped’,” she declares. “I can make a fuss.” 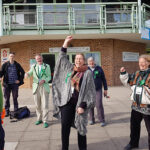