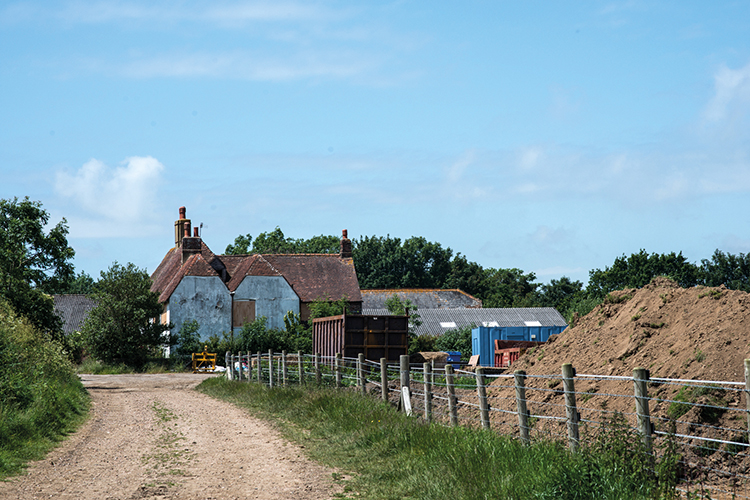 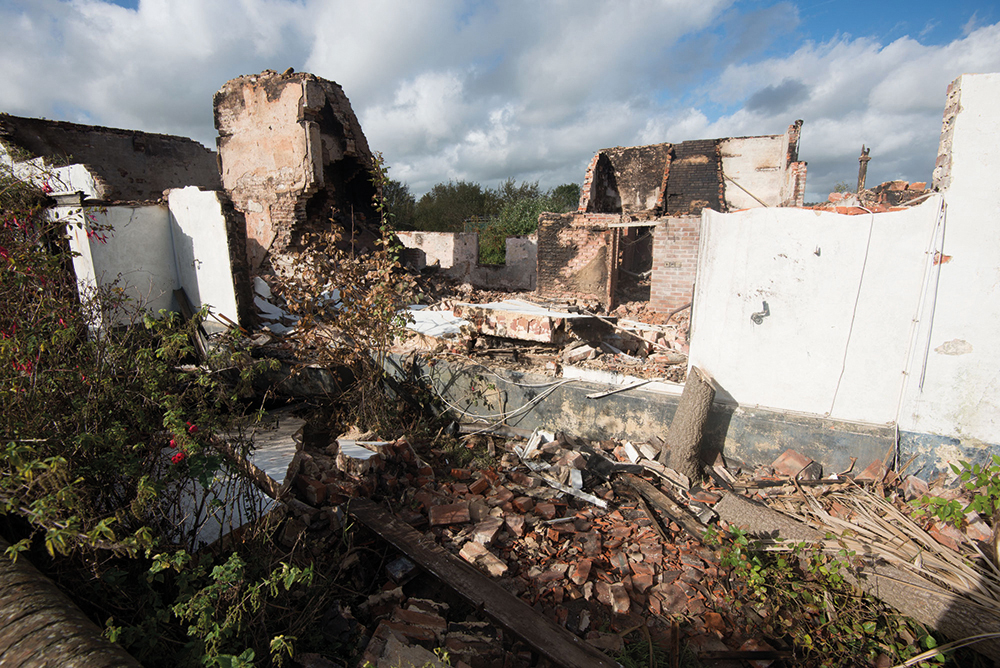 Arson at Glover’s Farm – before and after

Criminals see these sites as sources of illicit gain, damage or diversion. Damaging attacks on heritage sites are growing in number and severity through greed, selfishness and sheer wanton vandalism.

Some crimes are initially committed out of ignorance which drifts into criminality – for example, misguided metal detectorists may think they are ‘saving’ what they find but later decide not to report the discovery. Some crimes are opportunistic – such as the stealing of charity collection boxes – or mindless vandalism such as daubing paint onto historic properties, smashing stained glass windows, or driving over historic sites on track bikes or off-roaders.

Others who knowingly buy stolen scrap metal or relics from heritage assets are creating a market which is driving heritage crime.

The key methods of prevention are awareness of this growing issue, the courage to report, and education of the public about the erosion of their heritage by criminals.

Theft from Churches and Heritage Buildings
Theft of lead from church roofs is planned and systematic.  The total amount of lead required each year across our nation is 52,000 tons. The prices of lead ore and purified lead stock are rocketing due to lack of mining. This paucity encourages theft and re-sale. Major thefts of lead from church roofs in England in the last few months have included Hastings, Horsham, Haywards Heath, Forest Row, Gamlingay, Houghton Conquest, Pewsey, Baydon, Tidcombe and Elmswell.

Catching the Criminals
Ewhurst Manor, Shermanbury near Horsham had been a moated aristocratic residence at the centre of a medieval manor, containing buried archaeological remains of the medieval period. Between September and November 2014 its owner, Mr Lars Vestergaard, stripped the interior of the historic building, and extensively excavated the ground beneath. The unauthorised works were offences under the Planning (Listed Buildings and Conservation Areas) Act 1990 and the Ancient Monuments and Archaeological Areas Act 1979. Horsham District Council obtained a High Court injunction to prevent him from undertaking any further work when it discovered what was going on. He was later convicted by Brighton Magistrates and ordered to pay a fine of £22,000 plus costs in excess of £60,000.

Horsham Council cabinet member for planning and development Claire Vickers said: “The landowner in question knew that the site was protected as a listed building and a scheduled monument but did not apply for consent to do the works or seek specialist heritage advice prior to those works taking place. His actions caused severe harm to the heritage significance of the site.”

Paul Roberts, inspector of ancient monuments for Historic England in the south east, added: “The district judge found that the owner deliberately ignored legal requirements in order to cut corners and costs. In doing so he committed criminal offences and severely damaged a nationally important historic site”.

In another ongoing case, three metal detectorists, including Simon Wicks from Hailsham, have denied dishonestly dealing in Anglo-Saxon and Viking artefacts. They are alleged to have found treasure, including gold and silver coins, gold bracelets, silver ingots and a crystal sphere, in a village north of Leominster, Herefordshire in 2015.  Not reporting items more than 300 years old to the coroner breaches the Treasure Act. The men have appeared at Worcester Crown Court and will face trial in September 2019. West Mercia Police have said that their “complex” investigation involved both local and national archaeological authorities and experts from the British Museum.

Hastings area – Local Heritage Crimes
Part of the lightning conductor has been stolen from Hastings Old Town Hall. Lead has been taken from the List II building at Pelham Place and from a Grade 1 building in Hastings which cannot be named here. Twenty-five metres of lead have been stolen from the roof of Hastings Museum and Art Gallery in Bohemia Road.

Police also seek help in investigating the burning of Glover’s Farm, the smashing of the bat boxes under the Bexhill-Hastings bypass bridge, the burning of the bird hide and reed beds in Combe Valley Countryside Park, and the cutting of fences within the park from Bexhill to Crowhurst, among others.

Can you help?
Might you have information to assist identification of the culprits and their prosecution? To take the weight of stolen lead, vans and lorries may have to be specially strengthened. Do garage staff know of any recent work like this which made them suspicious? Do you see vans and lorries turning up at churches in the evenings, night time or even in broad daylight? Is that team of builders working on your local church roof really supposed to be there, or are they stripping the roof to sell the lead? It does no harm to call the police and ask them to check on the ‘contractors’.

The police – and site owners and curators – need your help to preserve local history and expose criminality. There are national wildlife and rural affairs strategies involving local and national organisations, police and insurance companies, yet the most important way to save our heritage is to report any suspicious activity.

• Please report all heritage crime at the time on 101 or 999 or alternatively you can contact Crime stoppers anonymously on 0800 555111. You can report crime and incidents online at
www.sussex.police.uk/reportonline