Ashdown House, the six-storey office block between Sedlescombe Road North and Harrow Lane which has accommodated the clerical staff of the Department of Work and Pensions (DWP) in recent years, is set to be demolished. A proposal for 148 new homes to be built in its place appears to have received a favourable response from the planning department of Hastings Borough Council in pre-application discussions. The development is also intended to offer a new ‘discount supermarket’ and a fresh community centre to replace the former Civil Service Sports Club alongside.

The property owners, Danescroft Land, who bought the site in March this year, say that in normal times they would have hosted a public exhibition to show their proposals to the local community. Instead, under coronavirus restrictions, they delivered a ‘community newsletter’ last week to neighbouring homes referring to their project website and asking for feedback.

Prior to the acquisition by Danescroft, the freehold of the block was owned by another major property developer, Telereal Trillium (TT). When the DWP announced last year that they would be relocating into the Priory Quarter in Hastings Town Centre in 2021, TT invoked permitted development rights to prepare plans for the existing building to be retained but converted into 246 residential units – studio, one-bed and two-bed apartments.  Under legislation brought in by David Cameron’s government in 2015, a conversion of this sort, i.e. changing use from office to residential without substantial alterations of a building’s exterior, would have bypassed the need for planning permissions.

At the time, July 2019, Labour party councillors at Hastings Borough Council (HBC) raised vociferous complaints. The then council leader Peter Chowney spoke of “catastrophic consequences” of similar conversions in other towns and cities that were “creating slum housing… We are very concerned that this could happen to Ashdown House.” (See HIP 131: Council Horrified At ‘Slum’ Housing Proposal).

Cllr Chowney said that the council were looking into ways of challenging the legislation so as to oppose TT’s proposals, and urged both current and any future owners to consult about how a proper redevelopment of the site could take place “to create good quality, energy efficient and affordable homes, with the proper local scrutiny that a full application would bring.”

That outcry seems to have fallen on receptive ears following Danescroft’s acquisition. According to the company’s recent newsletter, their initial scheme presented to HBC in the spring of this year proposed complete demolition, with a replacement build of 187 prospective homes, later reduced to 167 plus a discount supermarket. The current proposal, which reduces the number by another 19 units, is designed to take into account differing site levels, avoiding some homes being heavily overlooked by others, and introducing additional landscaping and play space.

Demolition will itself be a complex business. There is significant asbestos in the fabric and a large oil tank underneath one of the existing car parks which is used to heat the existing building.  Neighbouring householders will clearly suffer far more noise, dust and disruption from construction traffic from the site than would have been occasioned by internal refurbishment only.

But first reactions from the local residents of Harrow Lane seem more accepting of this redevelopment of a brownfield site below the road than of the concreting over of the playing fields above it.  Here in August 2019 HBC awarded itself outline planning permission for the building of up to 140 new homes. The five-hectare playing fields site is currently being marketed by regional property agents SHW, who have set a bid deadline of 18th December.

• You can find out more at our dedicated webpage: hastings.cityofsanctuary.org/lift-the-ban-campaign

•New (November) research report on the effects of increased poverty in the pandemic for people seeking asylum asylummatters.org/wp-content/uploads/sites/117/2020/10/Locked-into-Poverty-Life-on-Asylum-Support-Nov-2020-Web-Ready.pdf

•The excellent recent Lift the Ban report gives all the facts and figures, as well as personal testimony, lifttheban.co.uk/wp-content/uploads/2020/07/Lift-The-Ban-Common-Sense.pdf 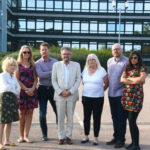