Friends of the Pier: “We’ll be here when the time comes”

Friends of Hastings Pier (FoHP), the community group whose bid to buy the pier in June was unsuccessful, remain buoyant despite the withdrawal from frontline action of two leading activists, Jess Steele and Adam Wide. 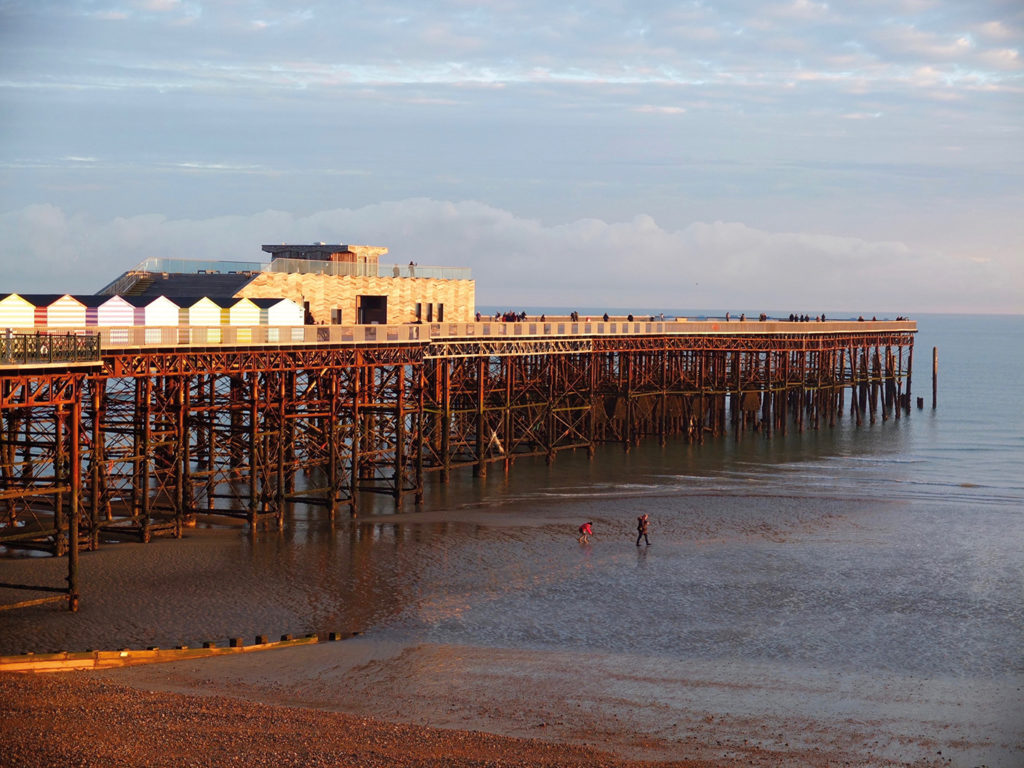 At a packed meeting at the White Rock Hotel on Saturday 1 December, with over 100 supporters present, Ms Steele explained to them that she needed to focus her current energies on development of the Observer Building. Mr Wide, who had been heavily engaged in developing strategies for investment in the pier in support of the Friends’ bid, was also stepping down from any active role, though he was ready to renew his involvement if and when community ownership was attained. However James Chang, who chaired the meeting, then invited others present to join him in keeping the group alive and active, and 12 individuals put themselves forward there and then to form a new leadership team.

Ms Steele explained to the meeting that the council had last month accepted re-registration of the pier as an Asset of Community Value; the original registration had lapsed, after the previous owners, Hastings Pier Charity, went into administration. That meant that, if current owner Sheikh Abid Gulzar should put the property up for sale at any time, there would be a six-month window for FoHP, to put in a bid: “We’ll be here when the time comes” she said.

In an open debate, there were some calls for FoHP to reconcile themselves with Mr Gulzar and pursue mediation. Concern was expressed that adverse reports (including in this newspaper) concerning  about his financial record and criticisms of his current planning application were causing him to refuse to meet with, or listen to, the Friends or anyone else representing community interests. However,  the more popular overriding opinion of the meeting was clearly that Mr Gulzar’s behaviour, since he took over the pier, did not merit any reconciliation or support.

Moreover, Peter Wheeler, until the previous week the chief maintenance engineer but now “no longer on the pier” (his words) told the meeting that, since the takeover, necessary maintenance of the sub-structure was not being undertaken. Mr Wheeler is, apparently, intending to bring a legal action against Mr Gulzar for constructive dismissal.

He blamed Mr Gulzar for failing to fund the purchase of requisite materials. He also said that there was evidence of deliberate and criminal damage being perpetrated, by a person or persons unknown, including tampering with a sewerage pipe and unscrewing of bolts.  With regard to the recent outbreak of fire in the pavilion Mr Wheeler said he believed there was no custodian monitoring of the fire alarm. He was concerned that, if the incident had happened at night, it might not have been spotted at such an early stage.

There was an overwhelming show of hands in favour of FoHP continuing to take an active ‘watchdog’ role to ensure that Mr Gulzar sustains all appropriate maintenance and security provision while he has ownership. It was suggested that, given the pier’s listed status, any planning permission Mr Gulzar may be given, could be made subject to a term requiring requirement for him to supply an annual report of its condition.

Questions were also raised as to whether and how the pier’s structure is currently insured, though it was not clear how this could be monitored.

Since the meeting, James Chang has informed members of the group that the new leadership team will meet “in the new year” to plan their strategy.  In the meantime they want to ensure that, in the absence of any engineering team present on the pier, appropriate repairs are being undertaken. Anything that seems to need attention should be photographed and details sent on Facebook to FoHP. “We will log the problem and try to find out when it will be attended to”, he says.