Storm Eunice left an expected trail of destruction as it hit the East Sussex coast last Friday and lingered on through the weekend. Unlike the 1987 hurricane, when trees were still clad in mid-autumn foliage and the ground pre-softened by saturating rain, nature’s winter defences proved generally resilient. East Sussex highways department, which engaged double its usual number of crews  to work both during the day and over the following clear-up period, counted just under 100 trees as falling and requiring clearance rather than the many hundred of 25 years before. However, roof tiles, fence panels and garden furniture all suffered predictable casualties, and one Bexhill landmark was utterly destroyed – see below.

Most of the citizenry of Hastings were well-primed to stay clear and indoors. The event might have been billed as the return of universal lockdown, reprised for one day only.

UK Power Networks, which is responsible for electricity infrastructure, said that the storm had “caused a month’s worth of faults in a day” with equipment damaged in more than 1,800 locations. The shutdowns affecting most of Hastings and Bexhill for several hours during the day, with some outlying districts getting no reconnection for 24 hours or more, didn’t just interrupt the basic amenities of heat and lighting. There were no phone signals, no internet, no TV. Shops were forced to close; cashpoint machines didn’t function.

Climate scientists warn that such stormy conditions are likely to occur with more frequency as global temperatures increase. If so, there was one message that can’t have been lost on anyone: just how reliant our civilisation is on a functioning electricity supply.

Blowing in the Wind

The 20-year-old Bandstand on the south terrace of the De La Warr Pavilion in Bexhill was one high profile casualty of Friday’s storm.

The De La Warr immediately released an elegiac online obituary for the structure, recounting its origin as a co-design by architect Niall McLaughlin and a group of Bexhill schoolchildren which won a regional RIBA prize award in 2002. Over the two decades since, it has hosted celeb concerts by Eddie Izzard, Keane and Jeremy Deller’s Acid Brass, as well as huge numbers of performances by local amateurs – swing bands, folk bands, indie bands, rockabilly bands, young musicians, acid house music, DJs, community and children’s choirs.

Past performers and audience members alike are called upon to share their experiences –“whether you appeared on it, danced in front of it, sat in a deckchair listening to music , had your wedding photograph taken on it, or were one of the original schoolchildren who helped design it – any memory or photograph to celebrate 20 years of the Bandstand being part of our story would be fantastic to see”.

The De La Warr say that the shattered structure had earned itself several “affectionate” names, including The Whale Tail, the Sea Shell, and The Heart. In one local swing band, though, it was always known as The Wind Tunnel – which tells its own story. 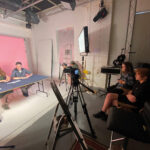