Ore village, already suffering from the closure of its library, has lost, at least temporarily, its post office. Southeastern rail services to its station are also planned to be cut.

On 15th August, the premises at 490 Old London Road offering post office services were closed without any prior warning. The manager up to that point, a Mr Ahmet Kul, had been in an agency relationship with Potent Solutions Limited, who effectively administer a large number of sub-branches for the Post Office. It has been reported to HIP that there were financial difficulties.

The Post Office issued a statement explaining that they do not own the premises and that they were “withdrawn for post office use at short notice”. They added: “We apologise for any inconvenience the temporary closure at short notice has caused.

“We understand how important a post office is to a community and we would like to reassure customers that we are working hard to restore a post office in that area as soon as possible. We are in discussions with local retailers.

“Any retailer interested in incorporating a post office in their premises should email  [email protected]e.co.uk or  phone 0333 345 5560.”

In the meantime, the nearest alternative branches are in George Street in the Old Town or at Malvern Way.

Meanwhile the rail service to Ore station is under substantial threat following an announcement by Govia Thameslink that from May next year it intends to start and terminate all Southeastern trains on the Charing Cross/Cannon Street line at Hastings. Passengers to and from Ore would thenceforth have to change at Hastings for a connection with the Southern service on the Ashford line (or use, generally at a higher price, the alternative HS1 route to and from St Pancras).

Govia are holding a “consultation” with affected parties which will be open until this coming Monday, 9th September.

Martin Woodfine of SHRIMP (St Leonards and Hastings Rail Improvement group) has pointed out that passenger use of Ore station “increases year-on-year and the station serves an expanding area…. The proposed withdrawal of services is very unhelpful.”

Council leader Peter Chowney has added his objections: “Ore is close to some of the most deprived areas of Hastings, itself the most deprived town in south-east England. With direct peak hour trains replaced by a potentially unreliable service from Eastbourne, the economic regeneration of this area could be inhibited, making it less attractive for employers and those considering moving to the area.”

Govia have described usage of its services at Ore as “extremely low”. 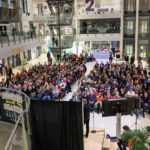