An application by a local charity to register the former Observer building as an asset of community value has been turned down by Hastings Borough Council (HBC). 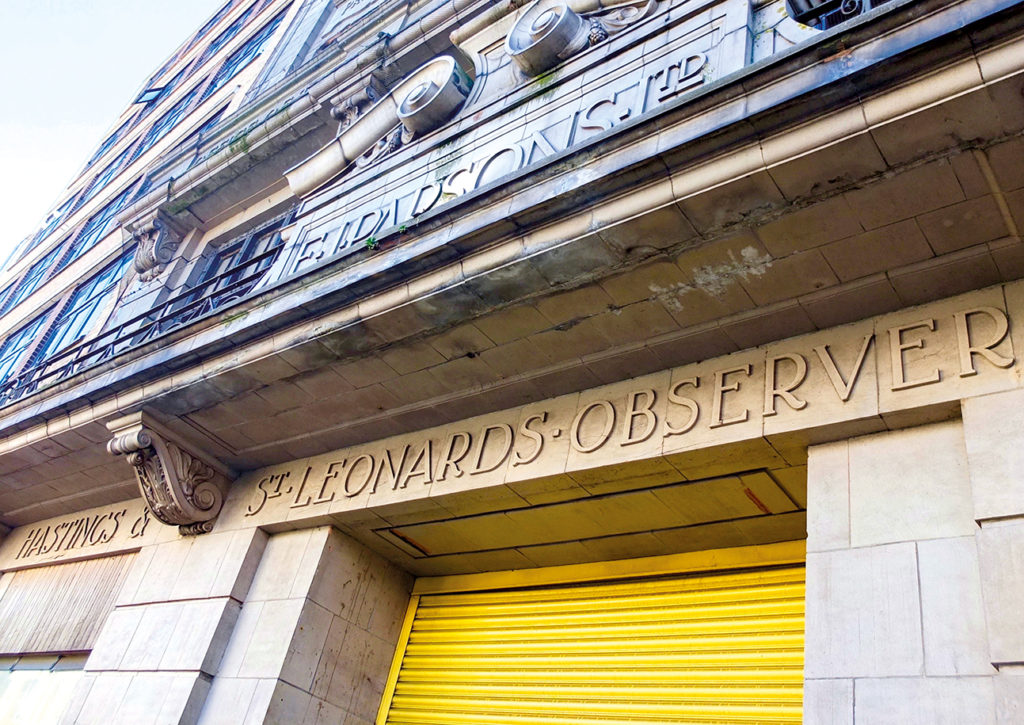 Heart of Hastings Community Land Trust – a charity set up to safeguard genuinely affordable living and work space in the area – applied in August to have the building listed, but it was turned down last Thursday (25th October).

It is one of a number of similar applications for disused or important sites around the borough, including the Ore Valley power station site, Speckled Wood, The Welcome Stranger Pub in Sedlescombe Road and Hastings Pier, which have been turned down by HBC.

The legislation, contained in Part 5 of the Localism Act 2011, is designed to give local communities an opportunity to identify assets which are privately owned but of communal value, and to bid for them in priority to a private sale. If an application is granted it triggers a moratorium which prevents owners from selling the site to another party for six months, thus giving residents and community groups a chance to raise funds and draw up plans to buy and develop the site themselves.

The Observer building in Cambridge Road has stood almost continuously empty for 30 years, with the exception of being opened temporarily in 2016 for a range of community-led activities. As reported by HIP in issue 112, the building is currently the focus of a community-led bid to buy it and develop it as a cultural, creative and community work space, with further plans to provide 24 homes that would be affordable to people earning a local wage.

Nevertheless, in response to the application by Heart of Hastings, the council’s Director of Regeneration Simon Hubbard has issued an assessment rejecting the nomination of the site on the grounds that (i) the public had not had access to the whole of the premises nominated; (ii) the community activities had been of “limited duration”; (iii) it was not realistic to assume that use of the whole of the premises would “contribute [sic] the social well-being or social interests of the local community over the next five years.”

Community activist Jess Steele, OBE, of Jericho Road Solutions and part of the team behind the bid at White Rock Neighbourhood Ventures, also responsible for the redevelopment of the neighbouring Rock House for community purposes, said the council’s reasons for turning down the application were “rubbish”.

“We’re aiming to buy it, we’ve basically got an agreement to buy it, and we’re just sorting out the money and detail of it. It’s just one of those many, many things that unfortunately Hastings council is not doing to step up to the challenge. With not having money of their own, the best way to step up to the challenge is to help other people do good things rather than get in the way of people doing good things.”

Planning Permission
The building’s current owner, Basement Endeavours Limited, which bought it for £320,000 in 2014, was granted permission by HBC in December 2017 to turn it into 50 flats plus restaurant, gym and roof terrace. It is now on the market for £1.5 million.

However, Ms Steele said the fact that HBC did not recognise the building as an asset of community value would not hinder the bid to buy it back on behalf of the community. She said she remained optimistic that a sale would be completed in December.

“The current permission that the owner has is to turn it into 50 flats for millennials from London at a quarter of a million pounds each, whereas our plan, through Heart of Hastings, is to turn it into work space and cultural space really quickly, and soon build affordable flats with living rents. It is a community asset and there is community well-being, but they just don’t get it, and that’s really sad,” she says.

Other sites
HBC has only approved two sites as assets of community value under the Act: the Old Town Hall in the High Street was listed in 2015 and Hastings Pier in January 2013. But the status lasts for five years and it is up to communities to re-apply to have the status renewed.

In the case of Hastings Pier, renewal was applied for earlier this year but turned down because it was insolvent and therefore, it was argued, the moratorium could not have been triggered. However, according to Ms. Steele this should not have prevented it from being re-listed. “It should still have been said that it is an asset of community value.’

Ore Valley
The site of the former power station in Ore Valley was rejected as an asset of community value despite being the focus of a community-led regeneration initiative by Heart of Hastings to transform it into a thriving, permanently affordable eco-village, with plans to deliver 77 homes and 100 jobs, in order to deliver “lasting regeneration with wider benefits for the whole town.”

HBC adopted a similar formula to the case of the Observer Building: public access was restricted to part of the nominated area, and the community activities which had taken place were of a limited duration.

It also cited uncertainty that “activities which contribute to community wellbeing or community interest can realistically take place on the whole of the nominated area beyond February 2018”, and that the whole area could not remain as an asset of community value once housing had been developed on part of the site.

But Ms. Steele said the power station site had been opened for community activities for over two years and that although any housing would no longer qualify for the status, the rest of the site should still have been recognised as such.

“Here is the one piece of legislation that local people can use to take action on their own behalf rather than expecting the council always to do it, and yet the one thing the council has to do is agree that something is an asset of community value – and they keep saying no.”

HBC was contacted to discuss the reasons for their  decisions but had not responded by the time of going to press.

« Homes For People Or For Wildlife?
Tax On Dividends »