Andrea Needham is already well-known in Hastings and St Leonards as a local campaigner for peace and on environmental issues, particularly for her prominent role within anti- Hastings-Bexhill Link Road group Combe Haven Defenders. What may not be so well known, however, is the part she played in disarming a war plane bound for genocide in South East Asia with nothing more than a household hammer.

Published by Peace News Press, Andrea Needham’s newly published book The Hammer Blow is an inside account of the Seeds of Hope East Timor Ploughshares action, in which four women use household hammers to disarm a Hawk warplane at a British Aerospace factory in Lancashire in 1996.  The plane was about to be delivered to the Indonesian military, for use in their then-ongoing campaign of genocide against the people of occupied East Timor.

After disarming the plane, the women waited to be arrested and were subsequently charged with over £2m of criminal damage. After six months in prison awaiting trial, they were acquitted by a jury in a landmark case which received extensive national media coverage. They were subsequently awarded the Sean McBride peace prize by the International Peace Bureau.

The book has already won praise from journalist John Pilger, comedian Robert Newman and poet Benjamin Zephaniah. Green MP Caroline Lucas commented: “Anyone interested in social change, or campaigning for peace, should read this book and take inspiration from the brave actions of these amazing women.”

Peace News has reported ‘While casualty estimates vary, anywhere from 60,000-100,000 Timorese were probably killed in the first year after the violence began in 1975. In 1979 the U.S. Agency for International Development estimated that 300,000 East Timorese — nearly half the population — had been uprooted and moved into camps controlled by Indonesian armed forces.  By 1980 the occupation had left more than 100,000 dead from military action, starvation or disease, with some estimates running as high as 230,000.’

Andrea told HIP: “We took this action after doing everything we could to stop the sale of these weapons by other means, and a jury found that what we had done was not a crime.  By telling my story, I hope to inspire other people to speak out against injustice, and to show that even when the cards appear stacked against us, we can still win.”

With publication coinciding with the 20th anniversary of this land-mark anti-arms trade action, Andrea will be talking about her new book at the Quaker Meeting House, 5 South Terrace, Hastings Town Centre TN34 1SA on Tuesday 27th February at 7.30 p.m.

If you support peace in our world, are in any way interested in current global events, such as Syria and elsewhere, and how the involvement of UK political and military interventions affect these then The Hammer Blow is a must read. Not least for the inspiration and hope to be gleaned from how the actions of committed and passionate ordinary local people such as Andrea and her fellow campaigners for peace can make a real difference to potential victims of oppression and war.

The Hammer Blow will be available from Book-Busters on Queens Road, Hastings. 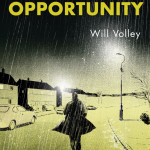 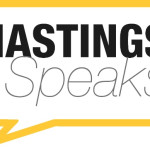 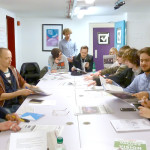