Border Force statistics show that, despite the rhetoric of politicians on both sides of the English Channel, passages of small boats carrying migrants/refugees from Europe to the Kent and Sussex coast have continued this autumn in record numbers. On one day, 6 September, in gentle sea conditions and warm weather, 785 people were reported to have made the crossing. That number was exceeded on 11 November – again in calm conditions though much lower temperatures – when an aggregate of around 1,000 arrived. Of these, 53 were brought in by the RNLI (Royal National Lifeboat Institution) boat stationed at Hastings.

In August last year, after a spate of landings, Home Secretary Priti Patel pledged to “make this route unviable”, and in an agreement signed in July this year, the UK contracted to pay France €62.7m (£54.2m) during 2021-22 to assist in fulfilling her goal. The French were to increase police patrols along its coastline, boost aerial surveillance and increase security infrastructure at ports. Ms Patel also threatened tougher action, with Border Force vessels apparently being instructed to intercept boats and turn them back from British waters. “Vile people traffickers” have been threatened with exemplary punishments. “Illegal” entrants have been warned that they would be deported summarily.

None of this has had any observable effect. On the contrary, around 25,000 people have made the crossing from France to the UK by boat so far this year – almost three times the total for 2020. Between January 2019 and October 2020, 231 people were returned to mainland Europe using the Dublin Agreement, which allowed EU countries to transfer asylum seekers back to the first member state they could be proved to have entered. But the UK’s rights under the Agreement have lapsed with Brexit. Immigration Minister Tom Pursglove told Parliament earlier this month that just five migrants had been returned to any country of the European Union so far in 2021.

Last Friday the government announced that they would hold a review of “how to prevent migrants crossing the Channel”, led by Cabinet Office minister Stephen Barclay, which will explore “what ministerial departments can do in an effort to make the issue more of a priority in government and the civil service”.

But the authorities’ chief focus is now clearly moving from executive enforcement to unprecedented legislative action. The Nationality and Borders Bill currently being debated in Parliament includes what many see as draconian provisions including:

• Removal of the Right to Claim Asylum: Any adults who “knowingly” enter the UK other than by an officially approved route will become “illegal entrants”, guilty of a criminal offence. They will have their asylum claim automatically refused, no matter what circumstances they may be escaping, including war, torture or forcible trafficking.

• Imprisonment and detention: As criminals, illegal entrants may be sent to prison for up to four years. Alternatively, instead of being housed in communities as now, they may be held in mass asylum camps, to be deported as soon as possible; or liable for “off-shore processing” in detention camps abroad – countries so far reported as potential locations include Tunisia, Ascension Island, Rwanda, Ghana and Albania.

Opponents of the Bill point out that discrimination against asylum seekers on the basis of their route of entry into the country is contrary to international conventions which the UK is signed up to.

However, Hastings & Rye MP Sally Ann Hart spoke in favour of the Bill in Parliament when it was first debated in July. She told MPs: “There would be mass immigration without border control, which would put enormous burdens on infrastructure and public services…Every country has the right to protect its borders”. And she described the Bill as “retain[ing] a compassionate approach and combin[ing] it with increased fairness, firmness and efficiency…
By cracking down on illegal immigration, we can prioritise those in genuine need. This will help prevent people making dangerous and unnecessary journeys to the UK.” 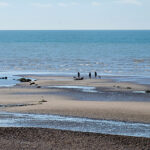