Who does not remember Jabberwocky, the Cheshire Cat, the Mad Hatter, and the Mock Turtle? Charles Lutwidge Dodgson (Lewis Carroll) was, and still is, held in great affection as the author of Alice in Wonderland and Through the Looking Glass. He was a mathematician, poet, Anglican priest, and photographer, and above all a brilliant wordsmith and writer. Playing with words was something he and his many brothers and sisters indulged in from early childhood, and this fascination with words – their manipulation and re-invention – never left him. 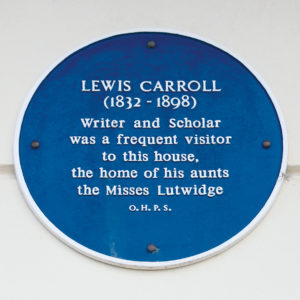 Those were the days when families invented their own entertainments, and Charles and his brothers and sisters wrote and produced an in-house magazine, as well as plays and charades, music, board and card games, mock battles with their lead soldiers, and stories of fantasy and drama; Charles had a life-long love of the theatre. He was third in a family of eleven children. Born in Cheshire in 1832 in the tiny village of Daresbury, the son of a parson, he was a regular visitor to Hastings, where he stayed with his aunts, the Misses Lutwidge – Charlotte, Margaret and Henrietta, at Wellington Square. These three women devoted their lives to good works, and were well-known for their beauty, generosity, and dedication to the poor of Hastings, turning down every offer of marriage.

Charles, and several of his siblings, suffered from stammering, which worried him all his life, and at first made him ill-at-ease socially, much preferring the company of children. There was also a suggestion that he may have suffered occasional epileptic seizures. His school days at Rugby, where he was bullied, were not happy, but, following in the steps of his father, he enjoyed university life at Christ Church, Oxford, excelling at mathematics. He also took Holy Orders as an Anglican Deacon, and was given a lectureship enabling him to remain at Christ Church for the rest of his life.

It was as the author of Alice’s Adventures in Wonderland and its sequel Alice through the Looking Glass that he became famous, first in England, and then throughout the world. These stories were made up to amuse three of the ten children of his Christ Church friends, Henry and Lorina Liddell. Henry Liddell was Headmaster of Westminster School, and later Dean of Christ Church, Oxford. Charles often took the children for boating picnics on the Thames, especially the three girls, Ina, Alice and Edith. There is no doubt that Alice was his favourite.

The Liddell family were to play a major part in Charles’ life, leading to much speculation as to his exact relationships with children. Seen from present-day perspectives we may question the propriety of his familiarity with children – questions fanned by the many hundreds of photographs he took of them, posed both clothed and naked. But it must be noted that in the 19th Century it was, with the parents’ approval, entirely acceptable, indeed fashionable, for images of naked or semi-naked children to appear on greetings cards and Christmas cards, as well as in many paintings and photographs by women as well as men – a cult seen as purely aesthetic, and symbolic of innocence. Following an introduction to the famous poet, Alfred Lord Tennyson, Charles showed him a photograph he had taken of Alice Liddell aged ten, scantily-clad as a beggar-child with bare feet, in a flimsy, off-the-shoulder, torn dress. Tennyson remarked that it was “the most beautiful photograph I have ever seen.”

Whatever the truth of the matter, the fact that there was a major rift with the family, and that pages from Charles’ diary for the years 1858-1862 were later torn out, leads us to speculate. The causes for the rift are uncertain – as well as his, perhaps too close, interest in children, there is evidence that he may have been courting the children’s governess, or that he may have fallen in love with their mother, or even that he had wanted to marry Alice’s older sister, Ina, at that time aged 14. Other theories suggest that it was Alice, his favourite, but she was only 11 at the time of the quarrel and her parents expected “a much better match for her”. It was not unknown for Victorian suitors to ask for the parents’ permission to promise a child to them for marriage later.

We may never know; in any case, Charles remained unmarried. There is no doubt that children loved his company, his story-telling and inventiveness, his understanding of their dreams, imaginings and fantasies, his kindness and generosity, and the sheer fun of being entertained by him. He later resumed his friendship with the Liddells, but this gradually faded. Alice grew up and married the cricketer, Reginald Hargreaves; they had three sons, and Alice lived life as a society hostess. She and Reginald suffered the grief of losing two sons in World War I. Alice died in 1934, aged 82. She had only ever expressed the happiest of memories of times spent with Charles.

Alice in Wonderland and Through the Looking Glass sold in their thousands world-wide, running into many editions. From struggling student, Charles ascended to wealth and riches. His later works did not achieve the same degree of popularity, and he continued to teach and live a quiet life as an academic at Christ Church. Only once did he venture abroad – to Russia on an ecclesiastical foray with Dr Henry Liddell. He died of pneumonia following influenza, aged 66, at his sister’s house in Guildford. His blue plaque may be seen at his aunts’ home in Hastings, at 2 Wellington Square.