The Greek Gods
What if these deities were alive today?

Of course I know they don’t exist, but they give us a rich language in which to describe experience. In this issue I look at fiery Hestia.

While Hermes and Aphrodite (Issues 145 and 139) are both deities who travel, Hestia never leaves home. Lacking the compelling contradictions of other Olympians she has avoided attention and is little used for branding. Hestia is the name of two charities for refugees and the homeless. Her Roman name, Vesta, is the name of a large asteroid, a 3D visualisation programme, a computer control panel, an Edinburgh restaurant. She survives in Swan Vesta, the strike anywhere match.

Usually described as goddess of the hearth, which conjures an image of a 1950s housewife polishing the grate, in fact she is not the fireplace but the fire itself. Now that we have invisible power, fire is most prominently a symbol of destruction or sexuality, but for the ancients, a home fire was an eternal fire: it must never be allowed to go out; it was a symbol of unity with fires on altars through every home, every community and with the fires of the cosmos – the stars, the sun, and the homes of the gods. Hestia was intrinsic to the very foundations of a house, with the power to confer with a smile and stroke of the hand all the things which sustained it including the ‘euphrones’ of the inhabitants i.e. the ability to think in the right way, a way which would ensure that all goes well.

Home is a compromised concept for us. Once a family refuge from intrusion it’s now permeable by media, commerce, the state. For the Greeks, home and family related to community and state in a cellular fashion, like plant cells reproducing themselves and creating larger organisms. Gender politics have given domesticity a dusty air; ‘staying at home’ has connotations of Billy-no-mates; fast food and piece-work fragments convivial meals; a homebody is just inches from a bunny boiler. This has consequences for our sense of interior life. “You’re so out there (like TOTALLY.)” is a compliment. Why does that give me a sense of being untethered, like a flitting bat?

Goddess of the home, Hestia is not homely. She gets the first portion of every sacrifice and like a gangster’s mum the injustices of the day are laid before her for judgment. The force of her nurturing is irresistible. She manifests in the reverie that’s induced by an open fire, the flickering energy that gives as it destroys. This is a special kind of attention, it’s focus, where self-consciousness is absent and imagination and emotional alchemy proliferate. (Focus is Latin for fireplace.)

She’s there in the moments when you’re having a meal cooked for you, there for the alchemy of ingredients working together, transforming into taste, nourishment, and sensuality.

She’s there in the holding spaces of therapies, though one generally has to leave home for those. In these troubled self-isolating times we could get out the candles and light her fire again. 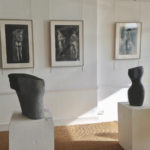