According to Theresa May, those of us who are against Brexit are Utopians, because as Citizens of Nowhere we live in the ‘No-place’ signified by Sir Thomas More’s neology from the ancient Greek, ‘U-topia’.

Whether May deployed this etymological construct deliberately is unclear. But we can be sure that the current skipper of the Ship of State, Alexander Boris de Pfeffel Johnson (aka, ‘clever clogs’, with his much-proclaimed familiarity with all things classical and historical) will have spotted the allusion immediately (if, indeed, he had bothered to pay attention). And while he now apparently perceives the great divide as between the “pessimists at home and abroad” who doubt the deliverability of Brexit, and those who believe in the sheer “pluck” and “nerve” of some idealised and transcendental ‘UK Inc’, as a far-right opportunist he will also believe that a society providing equality in all things social, economic, governmental and judicial is a political impossibility. His ‘Dystopia’ aims to satisfy a much more select constituency.

Not so this author. In the light of the technological advances driving world development towards an era of post-scarcity, Aaron Bastani (a co-founder of Novara Media who in June gave a talk at St Mary in the Castle on the eve of the book’s launch) calls for the “full automation of everything and common ownership of that which is automated”. He argues for his Utopia in some technical detail, aiming to show how to deliver a post-work society enabled by universal basic income in which hi-tech machines produce not for profit but for the people.

But even allowing for the amelioration of all the accelerating global crises (that of scarcity, he says, will be dealt with by off-planet mining!), we can be sure that the post-Neoliberal, cartel capitalists (aka the 1% and their protectors and enablers) who have so far wolfed down most of the proceeds of this Third Great Disruption/Second Machine Age are unlikely to relinquish their rents quietly. And for sure, de Pfeffel’s gang have seized the UK’s front line defences…

More published his vision in 1516, locating his imaginary Utopia on an island in the mouth of a great river off The Americas. The island had once been a headland, separated from the mainland by a channel dug at the command of the state’s first king, Utopos. While Fully Automated Luxury Communism (FALC) sits comfortably in the half-millennial tradition of optimistic utopianism inspired by More’s work, de Pfeffel’s imaginary project belongs to a much older literary trope: that of the Floating Island. Having cast off (‘unchained’) its anchor, de Pfeffel’s Brexit Isle is to head off into the mid-Atlantic, or perhaps float all the way to 51st USA statehood!

Introduced to world literature by Homer in the Odyssey, the trope is more ambiguous and open-ended than the Utopian/Dystopian binary. The hero Ulysses had obtained a leather bag from the god Aeolus, who resides on the floating island of Aeolia. It contains all the winds; all, that is, save the West wind, which is to blow his ship home to Ithaca. But while he sleeps his crew find and open the bag, releasing a tempest that blows them back to Aeolia. Fearing that he must be cursed, Aeolus refuses Ulysses any further help.

Bastani had once argued on behalf of Brexit, opposed in particular to the EU’s neo-colonial trade policies with the developing world.  He changed his position a fortnight before the referendum, arguing in an openDemocracy essay that without a properly thought-through Lexit policy the risks from a far right Brexit would (as they have so proved) be too great. We must all hope that de Pfeffel’s bag of tricks proves of equal bluster to Ulysses’, his journey likewise somehow turned back and his Ship of Clowns finding a new captain and crew. 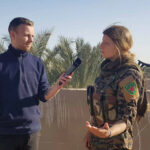 « The ABC Of Boxing
ARTS DIARY »