The next instalment of ‘positive views’ book reviews is here – and I’m looking at a seminal 1970s book, from Fritz Schumacher.

In 1986, Barry Lopez won the American National Book Award, for his wonderful 400+ page ‘travel writing’: Arctic Dreams. I was lucky enough to discover this wonderful book the next year, when the first UK paperback was published by Picador. To describe the book as ‘travel writing’ undersells it immensely – this work covers history, meteorology, natural history, geomorphology, anthropology, and of course the author’s own travels.

It is still, today, one of my favourite books, wide-ranging, beautiful, terrible, awe-inspiring, haunting, delicate, and full of wonders. Barry was wise beyond his years, with objective yet sympathetic skill in observation, and a deep reading of the history of the Arctic. He was acutely aware of human infractions on the nominally pristine environment to be found above latitude 66° 33’N – today’s unfolding environmental disaster caused by oil exploration, accessing shale oil and using hydraulic fracturing, was in fact underway, albeit on a smaller scale, over thirty years ago.

…SAW FIRST-HAND THE WAY DIGNITY WAS STRIPPED FROM NATIVES, THE WAY POLLUTION IS DEEMED AN ‘EXTERNALITY’

The depletion of a surprisingly complex biodiverse ecology, too, was well underway, and had been since (primarily Canadian, British and American) western explorers and prospectors had first started their travels into the North – a harsh, often lethal, environment that they hubristically sought to conquer. As an invasive species, man was of course already established there, and the Eskimo (as Lopez still referred to the general population – we were less awake to the politics of nomenclature back then, though when speaking of particular populations he uses their own tribal names, e.g. the Nunamiut) had long learned to live in the harsh conditions. Lopez invites us to discover their myths, their troubles, their amazing adaptations to the harsh environment, their hard ethics…

The arrival of Europeans slowly but inexorably broke the native human populations’ connection to the land: today, lifestyles are much less suited to conditions, and an awareness of balanced ecology much less embedded, for the majority of Eskimo. Whilst the portrayal of the fall of the native culture in Vincent Ward’s wonderful, if odd, 1991 film ‘Map of the Human Heart’ is a caricature, the truth of the situation was often very close to his portrayal. Lopez is very good on these issues, and on many occasions hunted with and studied the history of, say, Canadian trappers from Manitoba, whalers off Baffin Island, and hunters from Eskimo tribes around Banks Island, travelled with artists, spoke to oil prospectors, and saw first-hand the way dignity was stripped from natives, the way pollution is deemed an ‘externality’, with no economic cost to the extraction companies, and therefore not controlled (sometimes even when so much oil is wasted that it should be deemed an unacceptable ‘expense’, though for future generations, now even, that blind attitude to such a resource is astonishingly short-sighted, an offence).

For any flat-Earthers out there, his description of the Arctic night, of the movement of stars around the Pole Star, of the oddness of this pattern of living to southerners and vice versa, is salutary. The same is true for those excited by recent press about the ‘erratic’ movements of the Magnetic North Pole: Lopez exposes the degree to which this is, in fact, a kind of normality, and provides a chart of its position as triangulated by polar explorers from the early 1800s to the 1980s.

He covers amongst other things from birds to fish to men, the migration of caribou, herd behaviour of muskoxen, the way polar bears ‘invade’ human settlements as the temperatures rise with both the seasons and the ongoing warming of the climate (despite the cold snap New York felt last winter, the west coast up the Canadian coast to the Bering straits were at the hottest winter temperatures recorded with sea-ice absent for the first time in memory, living and written, on the Alaskan north coast). This warming has promised/threatened to open a permanent North-West Passage, a sea-route across the polar seas: only last month, a political skirmish ignited between Canada and the United States over whether the passage was in international or US waters, or Canadian waters (it is quite obviously Canada’s). The prospect of easier polar navigation opens the trade routes directly to China and the eastern federated Russian states for Canada, USA, UK, Iceland, Greenland, and reciprocally. Likely, all year round. The sea-ice, while more extensive in winter due to the huge amount of ice melted both at the pole and from Greenland’s ice sheets and glaciers, is much thinner and less stable than is ‘the norm’ in our experience, both due to warming. Lopez was writing over thirty years ago, and already changes were taking place, hunting grounds were less stable, species were migrating further south to escape the loss of habitat (and suffering warmer climes than they’d evolved to survive and thrive in) but it is as nothing compared to today.

Arctic Dreams was his second book, preceded by the excellent Of Wolves & Men, and since it was published Lopez has published relatively little: a volume of essays, Uncommon Ground; a couple of volumes of short stories, and one of Native American tales of the trickster Coyote. However, I’m a little ecstatic to report that he just published a follow-up, book-ending his career (so far), Horizon, which I intend to review very soon – keep your eye on HIP Lit.

• Arctic Dreams is available from Bookbuster. 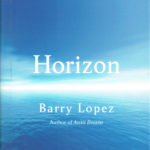