Earlier in the year, local arts company Dens & Signals teamed up with HIP to launch an Animal Encounter Story Competition. We asked readers to tell us about their real-life moments of connection with wild animals. We had a great response: people really care about this kind of unexpected encounter with animals, and here in Hastings we’re lucky to have a lot of amazing urban wildlife…

There were two categories, one for adults and one for under 18s. Here are the two winning entries, and in the next few issues, we’ll publish the two runners up from each category.

“One day we were in our car at the traffic lights on Priory Avenue, they were red, I looked out of the window and saw a small kestrel battling a pigeon on the pavement right by our car! The kestrel was on the pigeon squeezing it. I think it was trying to kill the pigeon because it hadn’t eaten for ages, for a kestrel to come into the town centre on a busy day it must have been very hungry. Then a lady came walking towards the kestrel, then the pigeon managed to fly away but the kestrel chased after it in the air really fast”

“I didn’t know who I wanted to win, the kestrel needed to eat it might have died if it didn’t but I didn’t want the pigeon to die”.

As dusk began its swift decline some of us would gather in the smoking shelter or sit outside at the tables provided in the garden. The wind chill was high, so we wore our coats with the hoods up if we had them. A big older woman in a fleece dressing gown was sitting alone in the shelter crying. “You all right?” I said in a quiet way, leaning down a little.

I walked away, unoffended, and moved over to the tables where a small hooded girl was sitting, smoking.

“Sure. I’m waiting for the badgers. They always come about this time after I eat.”

We didn’t say much – just chatted about how nice all the staff were.

“It’s not like hospital – they are much nicer” she said, and I agreed.

Soon it was getting darker and the end of her smoke grew brighter. A couple of the others joined us – washed out man in flimsy specs and pyjamas under a windcheater, and a woman in a lot of makeup who was texting into her mobile – tapping away with long purple fingernails and pacing around. They were all out for the evening show.

“They come round the back of the fence and then come right the way up here” said the small girl, who was called Cara. We were all waiting – even the pacing woman who kept looking around during texting in case she saw them.

“Let’s be quiet so they will come” said the man in glasses. So we did. It was almost dark and a half moon was bright and high.

The crying woman ceased, gently blew her nose, then slowly crept over from the shelter to join us.

We heard a rustle from behind the fence. It sounded like a wild boar had got loose out there.

The noises moved further up the garden, then the parade began. Three badgers thrust their way through a hole in the privet, and started to make their way down the lawn to us.

“Keep still” whispered the girl, and the pacing woman stopped.

The three continued on their route and ignored us, until one stopped and clocked the standing woman and the rest of us at the table. It stopped still, as if deciding. The other two merely skirted the lawn more to the edge. But the big one eyeing us decided to carry on its usual path.

It rustled only a couple of feet away from us as it passed by. It was business as usual for the badger, and it went on its way until we could see it no more. After a few seconds we began to gather up our stuff and go indoors. It was time to make a cup of tea and watch TV before bed.

We all agreed that we felt better for seeing the badgers.

• If you have an animal story but missed the competition, we’d still love to hear it. Email [email protected] and let us know what happened. But more importantly, why not tell the story to your friends, by phone to relatives who are socially isolating, or perhaps you could draw a picture for your window? 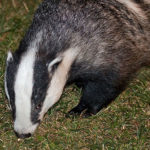 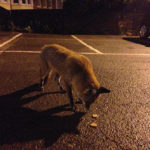 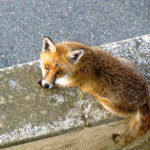 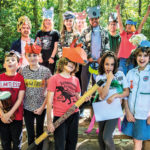