What on Earth are you eating?

It’s 20 years since scientist Arpad Pusztai appeared on Panorama and gave the UK its first insight into the worrying world of GM food. Susan McFie asks, did we heed the warning?

Aliens have landed
Scientists first discovered a way to cut and paste genes between unrelated species in the early 1970s. They had overcome the species barrier, but there was virtually no control over the experimentation. Had alien genes arrived on an intergalactic spacecraft, we would have seen legions of biosecurity agents. However, these unknown quantities were being cooked up right here on Earth.

In 1990, Jurassic Park author and visionary Michael Crichton described ‘a scientific gold rush of astonishing proportions’. The race to commercialise GM technology had ‘proceeded so rapidly with so little outside commentary that its dimensions and implications are hardly understood at all’.

Many tried to warn of a Pandora’s box being flung open. Hundreds signed the ‘Open Letter from World Scientists to All Governments’ calling for a ban on GM crop trials and the patenting of living organisms. By 2013, there were 828 signatories representing 84 countries. 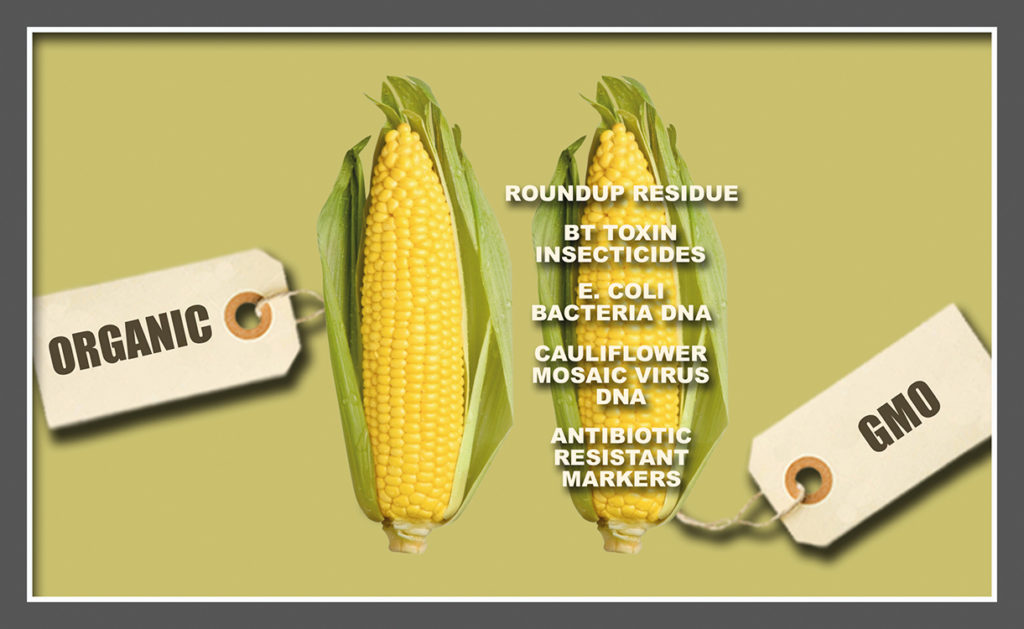 Professor Putszai’s Snowpots
In August 1998, the British public had a rude awakening when Professor Arpad Pusztai was interviewed on BBC’s Panorama. Pusztai was a highly-regarded scientist and keen proponent of GM food. He and his team had secured a multi-million pound grant to study the health effects of GM foods in animals and humans. They did not anticipate adverse effects, but their findings were profoundly troubling. Rats were fed potatoes with genes from a snowdrop spliced into their DNA. They did not do well on the ‘snow pots’, suffering multiple organ and brain damage, immune disorders and stunted growth.

Pusztai’s brief TV appearance caused a riot – literally. Consumers picketed supermarkets after discovering unlabelled GM products were already being sold. Shops were forced to remove engineered goods from shelves. The press had a GM field day. Public awareness had happened overnight. This was the first
many had heard of the technology. The government had allowed the products to be marketed with no warning or public consultation. Professor Putszai’s revelations threatened to shut down a multi-billion pound project and subsequently he was forced to retire. His research was dismissed and documents stolen from his home.

Feeding the World
The GM propaganda machine went to work on public opinion. Proponents finally acknowledged that food was indeed being genetically altered but ‘all for the greater good’ in order to ‘feed the world’. This mantra had staying power, despite the fact that it could only be true if GM food had proved safe for people, animals and the environment. There was concern about modified organisms entering the food chain. Claims that experimental crops would be grown behind high walls caused hilarity. Had they not heard of pollinating insects and wind blown seeds?

Percy and Goliath
Once released into the environment, the alien genes could never be recalled and would inevitably contaminate other plants. Percy Schmeiser was a Canadian farmer in his 70s when his fields were contaminated by GM pollen. Schmeiser received no compensation for the damage; instead he was taken to court by the corporation Monsanto for illegally growing their patented crops. The Worldwatch Institute pointed out this was tantamount to dumping rubbish on someone’s land then accusing them of stealing. The courts, however, ruled in favour of the corporation, starting a trend putting many small farmers out of business and some in jail. Many settled
out of court, signing gagging clauses.

Suicide Seeds and Junkie Plants
Farmers buying Monsanto’s GM products were forbidden from saving seeds to replant for another season’s crop – the traditional practice could now result in a huge fine or even up to nine years in jail. Monsanto attempted to tighten control yet further by creating ‘Terminator’ genes, which when spliced into plants left them sterile. Poor farmers would be forced to buy new seeds each year. The technology was both unethical and dangerous. Sterility genes in the environment could theoretically result in mass plant extinction. This technology was banned worldwide by UN treaty, but GM corporations continued to experiment and came up with ‘Traitor’ or ‘Zombie’ seeds, which could be turned on and off by specific chemicals. The chemical corporation Novartis created plants engineered to die unless sprayed with a certain Novartis product. They had produced junkie plants. 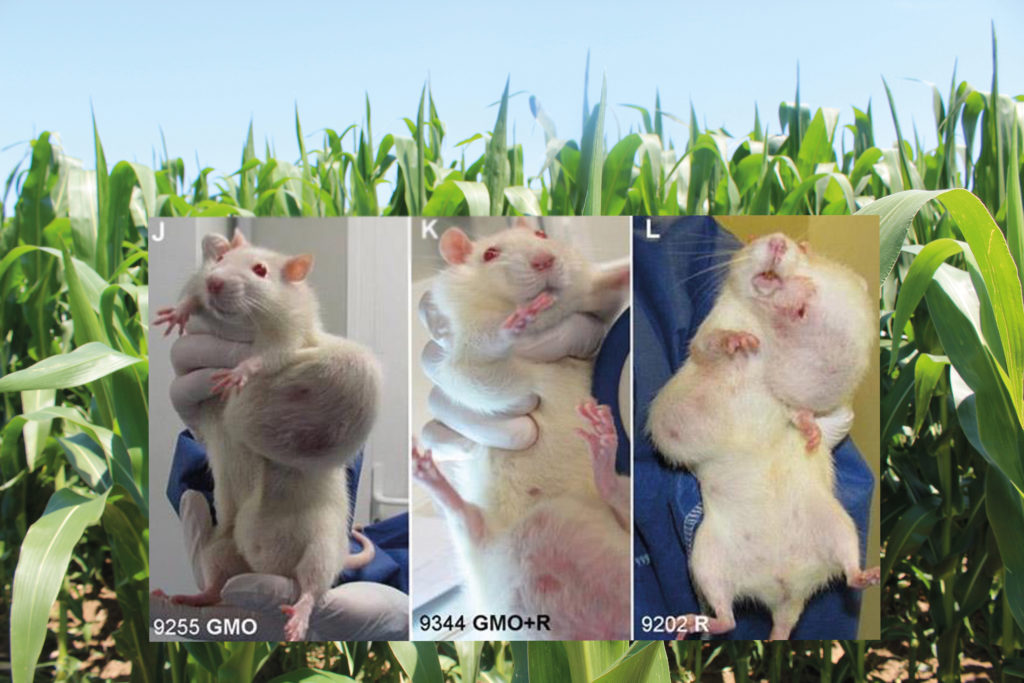 Trojan GMOs
Despite warnings from many whistleblowers, the new gene-altered and patented foods were soon being eaten unwittingly by millions. In the US, intense corporate lobbying meant engineered foods remained unlabelled. No information, no choice. The controversial products included milk from cows treated with a GM growth hormone to turbo-charge their hormones into mass milk production.  Europe rejected the alien invasion but the proponents responded with a cunning plan. Following a brief retreat they returned in Trojan horse mode. If Europeans wouldn’t eat GM crops directly they would eat the produce of GM-fed animals. Soon most animals would be fed on GM crops. The animal feed was unlabelled and so was the resulting produce.

In 2012, French scientists from the University of Caen published the first long-term feeding study using GM corn. It went viral mainly due to images of rats grossly deformed by huge tumours having been fed transgenic corn throughout their lifetime. The study led by Professor Seralini was attacked and the publishers forced to retract.

So, twenty years after Putszai’s appearance on Panorama, what has GM done for the world? GM crops are currently grown in 28 countries but banned in 38. We have seen crop failures, farmer suicides and a proliferation of unstoppable superweeds and resistant insects. Reproductive problems and birth defects have been recorded in commercial GM-fed animals. Human health generally reflects what is seen in animals.

Putszai’s and Seralini’s animal studies showed not only cancers and pre-cancers, but also damage to the gut lining. Cancer is running wild in the human population and digestive disorders have become a major market for special foods and medications. Soy allergy increased by 50% within a year of GM soya importation. In the US, violent reactions to food increased by 400% between 2007 and 2016.
Just what we might expect from an alien invasion!

• A GMO is a plant, animal or microorganism in which the DNA has been altered in ways that do not occur naturally by mating or natural recombination.
• Living organisms had been considered unpatentable until a GM bacterium was awarded a patent in 1980.
• Tobacco was the first GM crop. Engineered to be herbicide/antibiotic resistant or to produce a pesticide, it was also designed to be extremely addictive and with the highest recorded nicotine level.
• The main GM food crops are now soya, engineered to tolerate prolific spraying with Roundup, and corn, engineered to produce its own pesticide.
• Unlabelled GM enzymes entered the food chain from the 1980s as a food processing agent.
• Monsanto described its corporate goal as a world where 100% of commercial seed is modified and patented.
• According to the UN, the world already produces sufficient food. The millions starving are a result of conflicts and lack of access to food.
• The retracted Seralini study was republished in 2014. It remains the only long-term feeding study of a GM food. Industry studies, typically 90 days, are too short to observe developing tumours, typically at 4-7 months.