Hastings Council has been accused of confused priorities following their recent support of ‘No Mow May’ – a national campaign asking people not to cut their lawns in order to encourage bees and other insects.

“Uncut grass allows nectar-producing flowers to flourish and feed the pollinating insects that are such an essential part of our ecosystem,” says a recent council press release.

Councillor Maya Evans, cabinet lead on climate change and biodiversity added, “Small actions like this make a huge difference to help tackle climate change, and by taking part in ‘No Mow May’, you’re doing nature a massive favour.”

“Great idea,” said Chris Hurrell, “shame HBC’s sub contractors have just mown all the grass on the East Hill. As usual they have decimated wildflowers across the Country Park. I assume they did not receive the memo?”

Locals took to HIP’s Facebook page expressing concern when pavement weeds were sprayed at the same time. East Sussex County Council is responsible for walkways (and roads) maintenance in Hastings.

“They have some nerve. Asking for this [No Mow May] when they’re spraying the verges with glyphosate. How hypocritical,“ wrote Cheryl Bell. “There’s no coordination between the two councils and HBC is just as guilty [and] needs to stop ESCC poisoning our land.”

An HBC spokesman said, “We’ve left areas within our parks and open spaces unmaintained for wildlife to flourish and wildflowers to grow naturally and allow to set seed to encourage wild flowers for the following year. Some of our areas are maintained twice a year during spring and late summer to allow wild plants to flourish. However, due to Covid-19 there has been a delay with the first scheduled cut, with the contractor starting these works six weeks later than planned. Areas still to be cut will first be checked for signs of wild flowers and wildlife and, if required, mowing will be delayed until late summer to allow wild flowers to mature. Many of our areas are well maintained, as longer grass can trap litter and can lead to dog fouling issues.

“This year due to the pandemic we will be substituting bedding plants in a lot of areas with annual flower seed mixes and perennials which will attract pollinating insects. Look out for these areas and other areas around town, including our Local Nature Areas where wildlife thrives.” 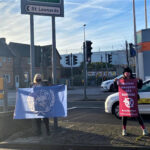