Don’t Bin it – Get a Free Refill

You can help stop plastic waste By Dave Young

With plastic pollution high on the national news agenda Transition Town Hastings wants to play a part in the countrywide Refill campaign to phase out plastic bottles by creating a network of free tap water points.

The idea – begun in 2015 in Bristol – involves individuals downloading an app showing the nearest participating sites, usually – not always – cafes and restaurants, identifiable by Refill stickers in their windows, who will top up re-useable containers free of charge.

So far there are over 1600 active venues across the UK. Transition Town Hastings wish to develop the scheme locally by spreading the word to the owners of local businesses with public access. Both businesses and individuals can sign up online, and as an incentive to download their app, not-for-profit Refill allows users to earn points towards a free water bottle.

Single Use
Buying water in single-use bottles contributes hugely to environmental damage. Plastic bottles use up valuable natural resources to make, are polluting to transport and create mountains of waste.

Welcome though the new government scheme to charge refundable deposits on bottles and cans is, carrying your own container means you don’t have to bother – and you save money. 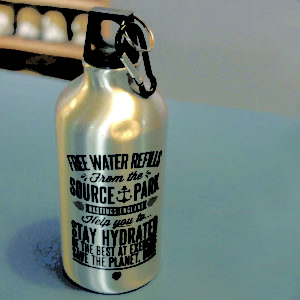 Promoting the Scheme Locally
Recruiting retailers to join the scheme and provide free water inevitably involves a lot of legwork. HIP joined two local campaigners, Nick Sangster and Julia Hilton, out on the town. Potential fill-up points were obviously pubs, cafés and restaurants – but could include hairdressers or almost any other shop. Would they sign up?

Nick had previous experience of getting businesses on board in Brighton where the Refill initiative is already well established. He reported no resistance at all there to the idea, with most venues committing immediately. Although some smaller premises had initially been concerned about queues developing at busy times of day, six months on this hasn’t proved a problem and the increased footfall is welcome.

The Refill app uses GSM tracking to show anyone looking to fill a flask participating outlets in their immediate area, giving both the distances to and the nature of the enterprises.

Empowering Individuals
The activists set off towards the Palace bar, Source Park, Pier and White Rock Hotel. No persuasion was required to enlist Source Park, who immediately agreed to participate, but as the manager gently pointed out, they do this anyway – even selling their own funky steel water bottle.

At each successful recruiting stop, recruiters issue window stickers, photograph the concern inside and out and immediately upload the pictures and location details onto the Refill database via a mobile phone, where – after a few moderating checks – it’s available to view online within hours.

Not just small independent businesses are involved; large concerns – including Costa, Brewers Fayre and Sainsbury’s – have already signed up on a national basis

The Refill stickers in shop windows identify participating premises while also acting as a prompt to conversations about the bigger issue of disposable plastic pollution. As Julia – a Green Party member who originally suggested the project to the Hastings Transition Town group – explained, refilling bottles reinforces the habit of avoiding unnecessary plastic packaging and enables people to feel there’s something they can do about the problem on an individual basis. 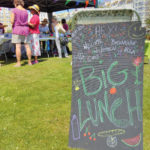 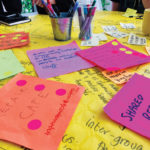 A Treasury Of Community Ideas 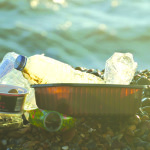 « HOCKEY – The Last Hit Cuts Deepest
Don’t Just Hope for a Better Council, Vote for One! »