Talking Making and Baking business with Maker and Baker

22nd February to the 1st March marks The Real Bread Campaign’s ‘Real Bread Week’, an annual celebration that draws attention to the additive-free loaves made by independent bakeries and encourages individuals to try their own hand at baking. In the spirt of ‘Real Bread Week’, I spoke to sourdough baker and Real Bread supporter, Ross Prentice. You might better know him as Maker and Baker (@makerandbakeruk on Instagram), the man behind the delicious-looking loaves sold at Sugarpie Honeybuns (see issue 141) and currently on Saturday mornings at SHOP (32 Norman Road).

Only Real Bread for Ross

Ross has been experimenting with making his own bread since attending a bread course fifteen years ago. In the last few years, he has discarded commercial yeast and bakes only sourdough, as he finds it not only tastier but also healthier for one’s gut. For Ross, healthier enzymes in the belly equal a healthier state of mind – healthy bread, healthy head if you will! As Ross explains to me, those that struggle to digest supermarket bread are not necessarily gluten intolerant but actually intolerant of the additives found in supermarket bread. In contrast, Ross’s bread is as natural product as possible, made with (predominantly organic) Shipton Mill flour, additive-free kosher salt, and with a sourdough starter born in St Leonards itself. A loaf, such as his favourite ‘Makers White’ with its smooth, delicately sour taste, takes forty-eight hours from start to finish.

Hobby to Business in just 14 weeks

Ross tells me that he never intended for his bread-making hobby to become a business, especially in such a short space of time. Enjoying baking bread for friends and family, Ross had previously ignored them when they had suggested he could sell his loaves. However, everything changed a few months ago when, wanting to be a friendly neighbour to new café Sugarpie Honeybuns, Ross popped around with a loaf for them to try. Much to Ross’s surprise, Lu and Ray (of Sugarpie) loved his loaf so much they asked him to be their regular supplier. Supported by his wife each step of the way (even when every worktop in their kitchen was covered with flour), his fledgling business has quickly gained momentum with Ross having to invest in a professional bread oven. Now, local residents message him on Instagram to reserve their favourite loaves, and a conversation with the owners of SHOP has resulted in a ‘Sourdough Saturday’ pop-up during February in which his loaves sell out in an hour (or less!)

An exciting future ahead

Ross tells me that settling into the new business has been enjoyable but also exhausting, with hectic hours reminiscent of his past career within the music industry. As to the future, Ross wants to take each day as it comes. With the success of the February pop-up, Ross and owners of SHOP have decided to continue with the pop-up in March and he hopes to expand the wholesale side of the business. However, Ross makes clear to me that even as demand grows, he wants to continue producing loaves of the same quality as they are now, refusing to take shortcuts. Talking to ‘Maker and Baker’, it is clear that he loves what he is doing, and that passion and care is shaped into every delectable loaf. When the pop-up continues after February, I know I’ll be first in line. 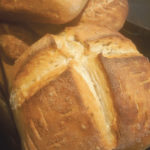 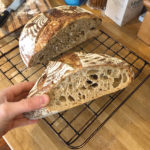 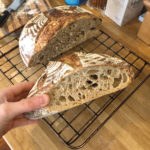