The Bok Shop is a free-range fried chicken and vegan fried chikn joint founded by friends Jamie and Howard in 2017 in Brighton, and it has now come to Hastings. According to their website: “the menu is a balance of contemporary and nostalgic street-style food, cooked with fresh and homemade ingredients …we’re no ordinary chicken shop!” PATRICK CRAWFORD investigates.

Who doesn’t love a freebie? The prospect of a free meal for two in these impecunious times kindles a certain joie de vivre which can surely never be experienced by the paying customer. It’s nothing short of thrilling to have the added bonus of being crowned ‘competition runner-up’ when approaching lunch at a squeaky-clean new Bok Shop, part of the recently redeveloped Courtyard buildings next to The Source Park in Hastings.

The actual winner of the Bok Shop’s Instagram competition received twelve months’ worth of free chicken (and a tattoo). Quite how one would entertain such an epic feat of culinary endurance is beyond me, so I was satisfied with second place – and since it was actually my partner who entered the competition, I wasn’t about to split hairs about the prize on offer. A free meal would suffice. And what a free meal it was…

When I see Buffalo spicy sauce on a menu in any form, it’s an easy decision from there on in, and the wittily named Jennifer Buffalopez burger didn’t disappoint. It was creamy, it was spicy, and the fried chicken was remarkably tender. Simply put, it was delicious, if a little too ‘saucy’ for me – but there I go splitting hairs again.

My partner ordered the vegan ‘chikn’ Satay Night Fever. I was fortunate to catch a bite: it was the best name on the menu and the burger itself was incredibly delicious. Vegan chicken is very hard to pull off, but when it’s done right, it’s as good as the real thing – and this was as good as the real thing. It was so good, in fact, that I felt deeply ashamed I didn’t go vegan for my own lunch.

The staff were friendly and accommodating and even waved us goodbye, which was a nice touch. The Bok Shop has an ever-expanding empire of free-range chicken restaurants, with Southampton soon to join Brighton, Eastbourne and Hastings in boasting Bok Shops.

• The Bok Shop is at The Courtyard, White Rock, Hastings and is open Monday-Sunday 12-10pm. 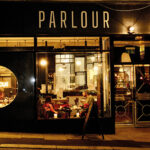 Will You Walk into My Parlour? 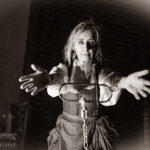 Ready for the Next Act 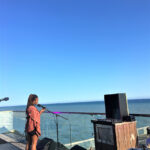 Story Time: at home on the pier