When Women Racers Came to Hastings

In March 1933 large crowds braved wet weather in Hastings to watch the finish of the RAC Rally – only the second such event. Cars, 351, or 327, accounts vary, starting from nine towns around the country (some as far away as Scotland) travelled 1,000 miles, checking in at control points along the way. To avoid penalty points each entrant had to keep to a time schedule prior to competing in acceleration tests and a concours d’elegance.

Hastings Corporation (forerunner of the current council) was delighted to host them. Determinedly trying to fend off the worst effects of an economic depression and develop its tourism industry, anything to persuade car owners to join large numbers of holidaymakers already arriving by rail.

The age of art deco

Modern technology, cars, aeroplanes, radio and architecture – such as the modern style Marine Court, caught the public imagination during the 1930s. Racing and rallying were hobbies for the rich, victory bringing enormous prestige to both car manufacturers and drivers. In the best traditions of British amateur sport, taking part was considered more important than anything as vulgar as victory. However, unusually in this era, the person with the lowest number of penalty points, and therefore the first and only ever female winner, was Kitty May Brunell, who drove an open top AC Ace, precursor to the legendary Cobra.

Four years previously Brunell was ‘second female’ at the Monte Carlo Rally in a Talbot 14/45.  She wasn’t the only female competitor in the 1933 rally either; at least nine others competed on the road to Hastings, including the ‘Hon Mrs Chetwynd’ – car ownership being almost entirely the province of the middle and upper classes. Where Kitty Brunell differed markedly from her fellow ‘gels’ was in picking up a spanner and getting her hands dirty.

Kitty, listed as having started from Newcastle, needed to average 25-30 mph in order to keep up with the leaders. Like her fellow drivers she was accompanied by a navigator; essential at a time before dual carriageways when even the whisper of a motorway lay 25 years in the future. Driving tests weren’t introduced into the UK until 1935; prior to this ownership of a car was effectively a licence to drive.

The fine spring that Hastings had been enjoying broke just in time to welcome the first cars to arrive and an overcast sky promised worse to come. Competitors were ushered into what ‘Motor Sport’ magazine described as, “the recently completed underground garage which runs for nearly a quarter of a mile beneath the Promenade. Even at 9.30 a good crowd of spectators had gathered, and their interest was maintained all morning, in spite of the weather.”

The condition of both cars and drivers was a notable improvement on the previous year’s rally, perhaps because regulations required ‘no single driver should be at the wheel for more than 700 miles’, doubtless saving them from dropping off to sleep and running into telegraph poles, as happened in the Torquay Rally the previous year. The line-up would leave a current day petrol head awestruck: Riley, Alvis, MG, Rolls Royce, Singer, Frazer-Nash, Lagonda and Invicta. These were the days of ‘crash’ gearboxes and double-declutching; synchromesh was a rarity and power steering wouldn’t feature on affordable cars for another half century.

‘Motor’ magazine rather snobbishly reported: “The competitors varied from the cheerful enthusiasts who accomplished the journey in a very antique Aston Martin to the sort of person who complains that a rally is rather an uncomfortable proceeding, as one cannot get on the road anything more nourishing than sandwiches, instead of a nice roast duck and vegetables. “Hastings Corporation gave the competitors a splendid welcome, both from the point of the entertainment provided and the feeling of hospitality which prevailed. England has nothing to learn on that score.”

Fortunately, bright sunshine prevailed in the afternoon with the winning cars displayed on the promenade. Among the prizes was the ‘Hastings and St Leonards Motor Trader’s Trophy’.

A town on the up

Overall the event proved a sterling success in Hastings’ continued battle to outdo other seaside resorts. The Labour Party held its conference in the town in 1933 while the RAC Rally entrants had such a good time they visited again in 1937, 1953, 1955 and 1958.

Bexhill had a ‘Philosophical Society’ and (later in the decade) the De La Warr Pavilion, but at the close of 1933, West St Leonards boasted a new lido. By 1939 over two million private cars were on UK roads with economies of scale making them ever cheaper. Get your kicks at the end of the A21; Hastings was now a ‘fixture of the motorist’s touring season’.

Read more about Kitty May Brunell 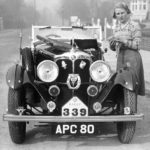