What do you call people who live in Hastings?

Last issue, we had a few people get in touch to object to our use of the word ‘Hastonians‘ on the front cover.

The correct word, they said, was ‘Hastingers’, which harks back to the Anglo-Saxon tribe the Hæstingas, who settled in the area towards the end of the 8th century. Hastonians, they said, referred only to those who had attended Hastings Grammar School, or William Parker. Rubbish, said others, and so it went on. 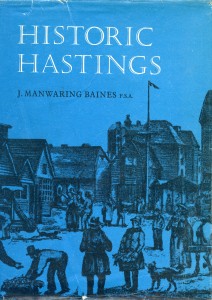 It’s not a new debate – ‘Hastonian’ has been around for over 100 years now. In his 1955 book Historic Hastings, John Manwaring Baines wrote: “Sometime about 1915 the word ‘Hastonian’ was introduced by the Grammar School, possibly as being vaguely reminiscent of ‘Etonian’. This has been taken up locally, many Old Boys remaining in the town, and has now replaced the old fashioned but etymologically more correct ‘Hastinger’. In view of the distinction for independence gained in A.D. 771 and 1011 by the ancient tribe Haestingas, this is a pity.” (Thanks to Jim Breeds for sending in this quote, and the picture.)

Clearly, as our readers quickly told us, ‘Hastingers’ hasn’t been entirely eclipsed. But it’s true that in common usage, ‘Hastonians’ has gained some serious ground. In a quick poll, which at the time of posting 73 people had taken, 59% answered ‘What do you call people who live in Hastings?’ with ‘Hastonian’, versus 29% for ‘Hastingers’. The remaining 12% (mainly jokers) answered variously ‘Hastafarians’, ‘People’, ‘Hastinites’, ‘Hastinkers’ and, less daftly, ‘Hastings residents’.

Clear as mud? I can’t think why this Croydon/Bognor/Brighton/Hastings lass was confused, but hey, I’m glad I’m not the only one.

Linguistically speaking, if you take a descriptive approach (ie usage should dictate rules) rather than a prescriptive one (ie rules should dictate usage), there’s nothing wrong with ‘Hastonians’ – any more than there is with any other word that entered the language over a century ago and changed in meaning over time. But by that same reasoning, re-establishing ‘Hastingers’, or even ‘Hæstingas’, as the preferred term is simple and entirely possible. All you have to do is use it loud and use it proud, and keep doing so until it catches back on.

I can’t promise all of us at the Hastings Independent will get on board with that – it’ll come down to each writer’s personal preference. But thank you to all those who wrote in and took our poll; I for one am a lot more informed now.

Here’s the data sheet of all the responses so far, for the other geeks out there who find this stuff fascinating: Hastonians and Hastingers.

And here’s a follow-up comment from Jim Breeds, in which the argument gets even older:

I knew J M Baines a little, and he was, as you would expect of the HBC Museum curator, dedicated to his subject, 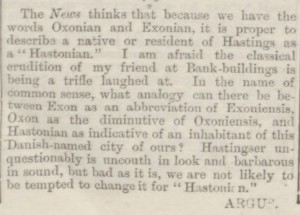 the history of Hastings. How many hours, days, months and years must he have spent locked up in research rooms across the county, including Hastings Library, investigating, noting down, and cross-referencing his notes is anyone’s guess, but it must have been considerable, to understate it somewhat, no doubt. His work, including the Historic Hastings book, often makes reference to old newspaper articles, which he must have read from the original paper copies in the archives, since we are talking about the pre-microfiche/microfilm days, let alone the advent of computers and the Internet. I can now do from the comfort of my own armchair at home, things that he probably never could have dreamt of – such as searching the British Newspaper Archive by keyword(s). When he was writing in 1955 of the invention of the word “Hastonian”, his ability to search the old HSLO newspapers for the occurrence of that word was probably limited to the time available to pore over hundreds of articles per edition in hundreds of editions, on the off-chance of finding the word. In other words, it probably wasn’t going to happen, and he went with a decision to date that to circa 1915. A 21st Century online keyword search, however, brings up a couple of interesting snippets. Such as this; a piece written in the “Flotsam & Jetsam” column of HSLO on 24th September 1887 by “Argus”. This is the first use of the word “Hastonian” that I can find in the newspaper archive. “The News” was a rival local newspaper.