Hastings has traditionally welcomed those who march to the beat of a different drum. This may be why, historically, subcultures have thrived here. There is an unyielding spirit of rebelliousness that stretches all the way back to days of smugglers hiding their booty in the caves above the town. We know of the Steampunks and Bikers who roar into town for annual celebrations. But what of the lesser known subcultures that flourish here? Leigh Malaihollo met with three Hastings residents to talk about their unique lifestyles.

On a grey post-lockdown Saturday afternoon, I find myself in The Fountain on Queens sipping a G&T. It’s the first time I’ve stepped into a local pub in six months and the place is gently gathering energy for a sold-out Drag Cabaret show happening later that evening.

Hastings pubs have often played a huge part in local subcultures, so it seems appropriate that this is where I meet Jack Kennedy, a young, local queer performer and activist. “Growing up in Hastings, I never saw any queer representation,” he tells me. Despite this, Jack made his drag debut at Hastings Carnival at the age of eight when his friend declared she did not want to be a princess in the parade. He stepped into her heels and dress for the occasion. “It was a moment,” he says with a smile.

But it was in the bright lights of Brighton that he really found his community. It was there that he mastered the art of Drag as his alter-ego: Paris Grande. The ritual of transforming into Paris is as significant as the performance itself. For Jack, who has ADHD, the focus involved in the creation of every polished part of a finished look is almost therapeutic. When Paris takes to the stage, she commands the attention of a lively and interactive audience.

Drag is a subculture firmly rooted in the gay community, but its aesthetics and language have been lapped up by the mainstream following the enormous success of TV show RuPaul’s Drag Race. “The majority of what we see on TV is from one franchise, and they’ve got the monopoly on it,” Jack patiently explains. “There’s still a disconnect between TV drag and local shows.” The rise of aesthetic-heavy Instagram alongside Drag Race has seen some Drag Queens catapulted into celebrity but left others feeling disenfranchised along the way. It all begs the question: does a subculture lose its edge once it has been swallowed up by the mainstream?

It could be argued that Hastings itself is in danger of having her rough edges smoothed out to make her more palatable to the city dwellers buying homes here in droves. Will these changes in the town pose a threat to the spirit of the place that has nurtured subcultural groups for many decades? Or could it be that the town is evolving to include more diverse groups of people living their unique lifestyles? The fact that we are sitting in a relatively new local pub that hosts drag shows and queer performers is hopeful.

“Hastings is really good at creating events for the community, but they are not always events where everyone feels welcome,” Jack says. With his live performances put on hold due to Covid-19 and a move back to his hometown just before lockdown, he is focusing on the future and working tirelessly to create events and spaces for those that haven’t yet found their community in the town. Drag shows on the Hastings Pier and a festival showcasing young Black performers are just two of the projects Jack is currently planning.

Social isolation and distancing have pulled us apart and pushed us further online. There have been many cancelled events, but there have also been gains for some subcultural groups.

British Naturism, a large national Naturist organisation that promotes social nudity, reported that membership numbers had almost tripled during lockdown. This was in line with a global trend of the growing popularity of naturism during this period. It seems the confinement of the general population to their homes created a thirst for freedom that found expression in getting naked. Perhaps clothes have become less important and more of a burden as we spend more time apart from one another and our priorities shift. Whatever the reasons, it is certainly an interesting phenomenon to note. Naturism has traditionally been on the fringes of subcultural life, even in a town as rebellious as Hastings.

Naturist Richard Collins is well-known on the local music scene. “Are you going to get naked tonight, Richard?” is a common question he gets from many of the young bands playing the pub circuit. He will occasionally go ‘full monty’ when at a gig. “I’ve never been thrown out of any venue,” he reassures me. It dawns on me that Richard is the naked guy I used to see dancing to punk rock bands at the infamous, and now sadly permanently closed, Tubman pub. “Yeah, that was me”.

When he isn’t embracing nudity, Richard enjoys wearing skirts, sarongs and dresses. If he must be a part-time ‘Textile’, the term used by Naturists to describe non-naturists, then he would prefer to wear clothes that allow some degree of freedom. Apart from being more comfortable, it is far easier to remove a dress than multiple items of zipped up and buttoned-down clothing and that is very practical for a Naturist.

It’s been 40 years since Richard stumbled across a nudist beach at a remote location near Bournemouth and decided to become a Naturist. There are plenty of nudist beaches in the UK including Fairlight Cove near Hastings which happens to be the first beach designated by a council as a nudist beach back in 1978. Richard has spent a great deal of time there over the years and it is happily frequented by nudists and ‘Textiles ‘alike. For him, Naturism has been a great way to get to know people and find friends within the local community. If nothing else, it’s a great icebreaker. Once famous for being the Naked Cyclist of Cambridge, he has found himself talking all things Naturism on radio shows, television programmes and appearing (naked of course) in Julian Temple’s 2006 documentary Glastonbury. There have been run-ins with police over the years, mainly down to the popular misconception that being nude in public is illegal. (It isn’t by the way, unless the naked person has the intention to cause harm or upset to others.) Richard confirms it is essential that Naturists understand the law and their rights, should they be confronted by law enforcement. But overall, he is happy to report that most people he encounters aren’t bothered by nudity. In fact, Fairlight Cove is getting even busier of late, perhaps a sign of people shedding their inhibitions along with their clothes. Due to erosion, the path down to the beach is precarious, but local Naturists continue to maintain it, as Country Park wardens are prevented from going there under health and safety restrictions.

Editor’s note:
A member of the public has got in touch to complain about the inclusion of naturism in this article, wishing us to point out that it can sometimes cause upset or distress. We are happy to include the link the complainant sent which gives guidance as to how the justice system handles incidences of naturism in public places.
https://www.cps.gov.uk/legal-guidance/nudity-public-guidance-handling-cases-naturism

As I speak with Luke Funnell over an evening Zoom call, I am gripped by his passion for reintroducing people to nature. Rewilding is a term often used to describe the reintroduction of plant and animal species to their natural habitats. But for Luke and his team at Project Rewild, the focus is on people and their reconnection with the natural world. Human beings are, after all, a species of nature. “We’ve got to the point where it’s hard for people to even feel they’re a part of the natural world,” Luke explains. This disconnection, he believes, is at the root of our destruction of our communities and our environment. It makes sense. If children grow up learning about nature from books and videos, rather than learning in nature itself, they are likely to feel separate from it and therefore unable to feel the gravity of the threat against it. Nor will they have the knowledge of how to help it in a time of crisis.

The current pandemic and recent global effects of climate change have highlighted the systems that have failed us as a society. Rewilding is a subculture that may well provide alternative lifestyle choices that prioritise sustainability and community. Luke certainly thinks so. He has witnessed the hugely positive impact of placing children in beautiful natural spaces and allowing them the time and space to learn. For kids who struggle within the standard school system, this can be life-changing.

Luke cut his teeth as a Hastings youth worker and quickly realised that many of the systems put in place to help children and teenagers in care are far from adequate. The courses in bushcraft, shamanic teachings and forest schooling that he went on to study were excellent but inaccessible to those without a disposable income, a fact he found frustrating as someone who grew up on a council estate in Hollington. It solidified his aim to provide an alternative education to everyone, regardless of income.

“This needs to be everywhere, this needs to get into all our communities, this high level of understanding and connection to nature.” Project Rewild offers free courses and alternative spaces of learning to those who have decided not to return their children into the school system after lockdown.

The ‘new normal’ may well see education evolving into more inclusive, less restrictive forms as subcultural methods find their way into the wider, post-Covid world. During the national lockdown period, families were forced to slow down and spend more time in each other’s company. When they did venture out, it wasn’t to shops or cinemas, it was into the numerous natural spaces in and around our town. Different ways of living have been embraced, perhaps never to be lost again. This is Luke’s hope as we start to “get back to normal”.

“How do we educate our children? What do they really need to learn? A lot of that is an understanding and connection with nature and themselves” he continues. This thinking is at the heart of his new alternative education group enticingly named Wildlings School of Woodcraft and Wiccary, aimed at children who are not in the school system for a variety of reasons. The increase in parents choosing to home school their children in East Sussex over the last two years may be a sign that parents were already feeling discontent with the state of schools. Time will tell if concerns of Covid-19 and added restrictions in schools will push more parents, and their children, into the schools of the forests and beyond. 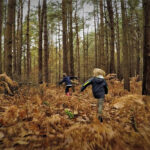 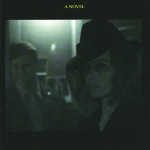