MYSELF: Blimey, have you seen the pier lately? It’s turning into a shed-park.
READER: Are you referring to the newly installed log cabins?
MYSELF: No, the ones I saw were big wooden sheds, made from planks.
READER: Those were the new log cabins.
MYSELF: They were not log cabins. Log cabins are constructed using logs.
READER: Well, smartypants, where do you think planks come from? The plank fairy?
MYSELF: I know where they come from. Look. A log is wood. A plank is wood. But a plank is not a log. Planks are what you get when you saw up logs. Once that happens, they stop being logs.
READER: You’re being pedantic as usual. Just accept it. They are log cabins, whether you like it or not. A rose by any other name would…….
MYSELF: (covering ears) Lalalalala!

The BBC have announced that Formula E, the electric car version of Formula 1 will be receiving full coverage on Radio5live next season. Radio motor sports commentators are threatening industrial action, having been told by management that due to the car’s inherent silence, they will be required to make their own brum-brum-nyaaaaarg noises during races. Sven Bogussen, spokesman for ARSP, the Association of Radio Sports Pundits, told Hip: “This is devastating news for radio-based motor racing commentators. These men have spent years perfecting one unique talent, which is to be able to shout out the names of drivers and car manufacturers very loudly over the sound of 10,000 bees trapped in a bulldog’s mouth. For management to now ask them to make that sound, whilst at the same time doing very loud shouting, is, frankly, expecting the virtually impossible.” When I ventured to suggest that the BBC might simply provide racing car sound effects from their huge library for the men to shout over, Bogussen interrupted: “IF ANYONE SERIOUSLY EXPECTS ME TO ENDORSE A MEASURE THAT MAY THREATEN THE FUTURE EMPLOYMENT OF MY MEMBERS, THEN THEY HAVE ANOTHER THINK COMING!” he shouted aggressively into my face through a powerful megaphone.

Spoiler alert: if you don’t want your evening ruined, stop reading now.
Quarantino’s quirky version of Andrew Lloyd Weber’s Broadway follow-up to the doomed liner weepie is bound to disappoint drowning passenger fans. That said, brace yourself for a boffo twist at the end, which will require several boxes of weep-size Kleenex. The year is 2035, and the Green Star Line’s sustainable descendent of the original, doomed transatlantic steamer, RMS Titanic II, is now powered by four giant wind turbines, and employs 148 vegan chefs. Uncharacteristically for Quarantino, the first segment of this flick drags like a two-legged horse, which is largely down to Lloyd Weber’s familiar arsenal of po-faced dirges, worst offenders being the syrupy ballads Gluten Free Nelson Mandela and May I Contain Nuts? As the great Broadway entrepreneur Maurice Schumacher famously said: “Before you ladle on the schlock, always sock ‘em in the funny bone.” Fortunately, the mood lightens as the movie’s tempo picks up in the second act. We observe the slippery, slapstick path of true love as Ralph and Greta, the two singing protagonists, attempt to evade efforts by their respective families to thwart their upstairs-downstairs relationship. Towards the end of Act II, as the ship enters the freezing waters of the North Atlantic, we are treated to a spectacular ice-dance number on the upper deck skating rink, involving the crew, the passengers and the vegan chefs, after which Ralph and Greta sing the anthemic Sinkable? It’s Unthinkable! As Act III begins to hurtle towards its climax, we all know what’s coming next, or at least we think we do. Quarantino cuts back and forth between the loud, colourful celebrations and the giant iceberg speeding silently, ominously, towards the ship. Tensions rise on the bridge as the crew is alerted to the imminent danger, but the partying passengers remain oblivious. As dawn breaks, the iceberg appears over the horizon causing panic; however, global warming comes to the rescue with a last-minute thaw, and to huge cheers of relief, the danger melts away with only minutes to spare and the reduced floe scrapes harmlessly against the ship’s hull before dissolving altogether. In the penultimate scene, after the ship’s chaplain marries Ralph and Greta in the solar-powered ballroom, the 1,500 relieved passengers tuck in to a huge vegan banquet hosted by the grateful captain and served up by the chefs dressed as ballerinas (this scene features the entire cast as the captain belts out the best song in the film: If Food be the Music of Love, Eat On!). Three weeks later, in a rather downbeat denouement, the ship is found drifting aimlessly off the coast of The Azores, lights still blazing. It is discovered that all 2,300 passengers and crew have died from a severe outbreak of Norovirus H27 food poisoning. Certificate PG. Some mild nausea. 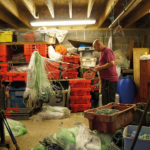 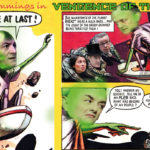 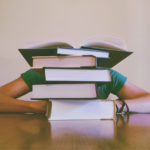 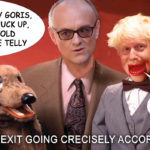