The column which puts the bubble in your squeak and then bursts it.

MYSELF: I assume you applied your Keith Richards mascara, clipped a parrot on your shoulder and walked the alcoholic plank last Sunday, utterly convinced you were the spitting image of Johnny Depp?
READER: Arrr, I’ll say I did! Pirate Day –  what a larrrk!
MYSELF: You can cut that out for a start.
READER: Did you mean starrrt?
MYSELF: I’m warning you. I’m on a knife edge here.
READER: Honestly, you are such a killjoy! How on earth did you manage to get this job without a sense of humour?
MYSELF: I own the block of flats the editor lives in.
READER: What? Oh dear, that must be really scary! I’d be petrified, especially at night.
MYSELF: No you wouldn’t. It’s in a really nice area actually, quite upmarket.
READER: Even so…I mean eugh…that’s well creepy.
MYSELF: Creepy?  What’s so creepy about a block of flats?
READER: Ah, a block of flats! Sorry! I thought you said a flock of bats.

IN THE COURTS
Lance Boyle (38), an unemployed drainage consultant of no fixed abode, was remanded for sentencing at Hastings Crown Court after being found guilty of altering the message at the bottom of the Welcome to Hastings sign on the A21 to read: “Home of the disappointed plumber.” Counsel for the defence Karl Mulberry of Rounder, Mulberry, Busch (Bexhill), entered a plea of non mensa in pianoforte with quid nuntam calamari, adding that his client was temporarily insane at the time of the offence, having ingested the entire contents of a family size bucket of Wings n’ Feet from the Silverhill branch of It Ain’t Just Chicken, after consuming two five litre jugs of Carters’ Old Traditional Pharmaceutical Cider. He pleaded for the court’s lenience in view of the fact that Mr. Boyle had recently been made redundant by the bathroom multinational Ubends R Us, and suffered from cerebrum mortem, a chronic condition he contracted in Algeria, where he spent two years as a septic tank supervisor for the French Foreign Legion.

REVOLT OF THE APPLIANCES
After an Upper Dicker man was treated by paramedics for severe steaming, the recent outbreak of kettle-related injuries has been declared a regional emergency. Hospital admissions connected to violent, unprovoked attacks on householders by kettles have tripled in recent months. Councillor Emphysema Ratatouille, spokesperson for The Department of Domestic Appliances, told us: “Kettles, under normal circumstances are non-aggressive, and happily co-exist side by side with their human owners. These assaults are almost always the result of allowing a build-up of lime scale around the electrical element, which, if left unchecked, can trigger unpredictable kettle behaviour. The simple act of descaling the appliance will afford protection in most cases, and we urge citizens to do so. Our advice is to stay vigilant and always keep a supply of descaling fluid in the kitchen,” adding, “We have nothing to fear, except fur itself.”

LONG RANGE WEATHER FORECAST
by Nostradamus
The 20th century AD will see the Teutons, led by a slight man with a Charlie Chaplin moustache, generate widespread thunder, leading to heavy showers around 1933. High winds and electrical thunderstorms all over the continent of Europe may make driving conditions dangerous. By 1941 freezing temperatures and severe snowstorms in the east may result in drifting. Should clear by 1945. Expect sunny periods with occasional rain for next fifty years. A transatlantic warm front will drift over the early part of the 21st century, resulting in banks of thick impenetrable fog. Twin obese orange chieftains with serpentine hair will rise up and speak in tongues, ushering in a long dark winter of perpetual night. If you’re going out, take a brolly.

CHEMTRAIL MENACE
Boffins from the Department of Misinformation think they may have discovered the source of so-called “chemtrails”, those mysterious clouds of airborne condensation which are thought to affect the intellectual processes of gullible idiots. Using the latest hi tech probes, the chemtrails were traced to the cooling chimney outside the laboratory of Hastings’ inventor Professor Gordon Thinktank. Police have surrounded the concrete tower with yellow tape, until specially commissioned tin foil-lined police helmets arrive from China. Professor Thinktank has conceded that the vaporous emissions may have leaked from his secret veterinary department, where he has been conducting experiments on seagulls, to see if they can be taught to eat fish.

Q: How many members of the Countryside Alliance does it take
to change a lightbulb? 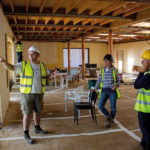 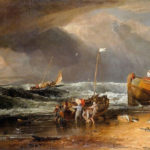