READER: I see there were riots at the Poundland closing-down sale.

MYSELF: I’m not surprised. There was 10% off everything.

READER: So what happened?

MYSELF: Apparently the police were called when two ladies battling for the one remaining combination nail file and fish knife tripped over a folding loofah rack which had been left in aisle 2. This propelled them into a shelf display featuring non-stick suction pads, iPhone accessory packs with tiny clip-on umbrellas, and USB-powered fridges just big enough to hold a thimbleful  of milk or a single sperm sample, causing the whole lot to collapse like dominoes. Three policemen were arrested.

READER: Shocking. It’s simply not worth cutting corners just to save a few bob. I once bought a lava lamp there, which was still active! Luckily for me I was out shopping when it erupted.

MYSELF: That’s nothing, when they first opened I bought my kids a bouncy castle, which turned out to be haunted. 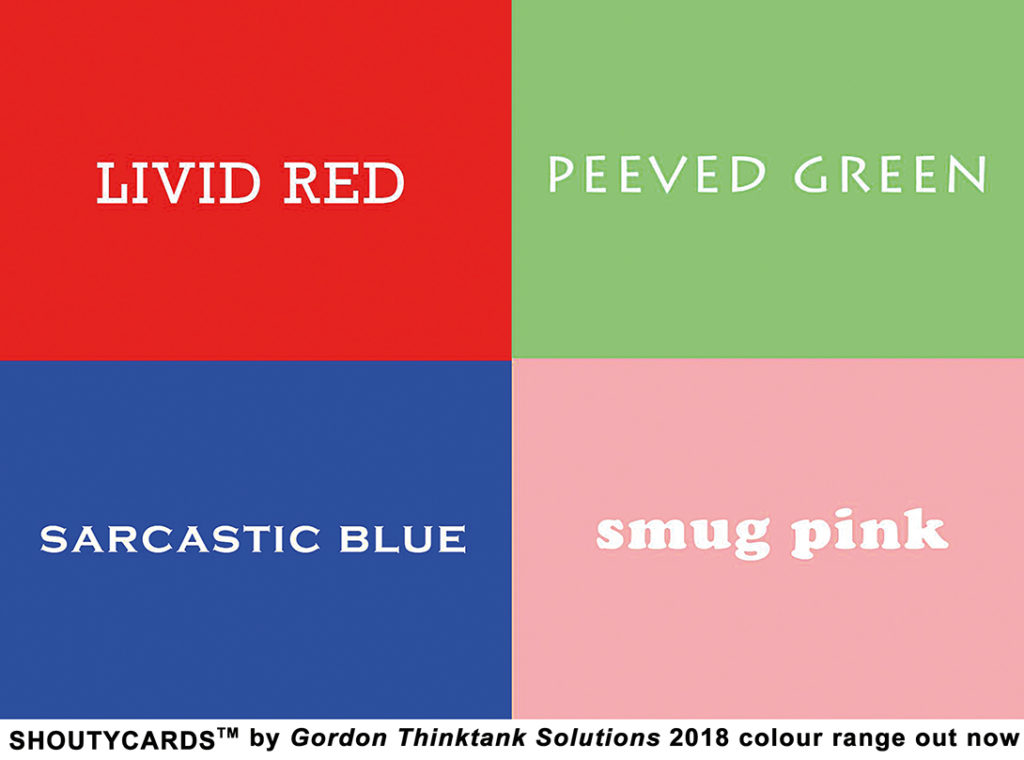 Advertisement
HAS EVERYONE STOPPED LIKING YOU?

Are you convinced your fascinating online insights are getting to the right place?
Do people, sheeple, or even peeps, skip past your perceptive/incisive/sharp-witted posts like gambolling lambs? It’s pretty clear you need a SHOUTYCARD!TM.

Carefully tailored to your mood, a message posted on a SHOUTYCARD!TM will force other web-dwellers to sit up and take notice! SHOUTYCARD!TM from Gordon Thinktank Solutions, will also render your comments troll-proof, thanks to its embedded firewall which also harvests your identity in order to send you targeted advertisments for lovely things. See illustration for our exciting new range of colours by Farrow & Ball and get shouty now!
#listentomewhilstimbuttonholingyou – www.shoutycards.com

DIM AND DIMMER
Hastings pier has been announced as the venue for the long anticipated return to the ring of fresh-out-of-rehab heavyweight face-puncher Typhoon Anger. His opponent will be Mexican veteran Mickey “Chihuahua” Gonzales (53), 11 stone lighter and 9 inches shorter than Anger and, his critics claim, ‘a pushover’. Gonzales’ manager, José ‘no way’ Huevos said, “Don’t underestimate The Chihuahua. Looks can be deceiving. My boy’s like a miniature combine harvester on steroids. He will reap The Typhoon like wheat, bag him up and leave him all over the ring in black plastic bundles. His footwork is a blur. One round will be enough. The difference in height means nothing. He can jump like a grasshopper. His flying uppercut will be the angry bull in Typhoon’s china-shop jaw.”

Anger’s manager Ron Maserati countered: “The Chihuahua doesn’t stand a chance. Typhoon’s in tip-top shape since his withdrawal symptoms wore off. He’s down to two bottles of gluten-free vodka a day. His right hook is even more devastating than before. It’s like a jet-powered piranha fish wrapped in cement. Don’t even mention footwork. One of the judges on Strictly described Typhoon’s feet as “like two tiny hovercrafts”. I’ll give Chihuahua two rounds at the most.”

Dubbed “Brawl of the Century”, the bout will take place on July 4th when the two brain-damaged ex-alcoholic sociopaths will battle it out for a purse thought to be in excess of £500.

POLICEFUL DEMONSTRATION
Like Pirate Day, Constable Day now in its third year, has captured Hastings’ imagination. This year’s event was a resounding success, and saw Hastings shatter the record for the total number of people assembled in one place dressed as policemen or WPCs. On a blistering June morning, the town quickly filled up with ‘officers of the law’, and by noon, the previous record-holders’ total of 8,710 (Taunton, 2017), was easily overtaken. Even after the judge disqualified 54 ineligible plain-clothes detectives and a confused couple from Suffolk who arrived wearing artists smocks and carrying palettes and paint brushes, Hastings’ 9,457 turnout easily outshone that of their west country rivals. Hastings’ new mayor Medved Oligarki praised the effort, saying: “The townspeople, as always, got into the spirit of things 110%, which is, coincidentally, also the figure Hastings chief of police Hydra Gorgon has given me for the regrettable spike in petty crime which occurred that day as hundreds of intoxicated ‘policemen’ emptied the shelves of clothing stores and off-licences, leaving a trail of confused shopkeepers across the town.”

WARRIORS’ WOES CONTINUE
Podraig Ballycuddy, new owner of Hastings & St. Leonards Warriors FC. who claimed to be a well-connected oil-rich millionaire member of the Saudi Royal family, has been revealed as a fraud. It turns out he is not an Arab sheik, but an Irish chef, whose previous job was flipping burgers at the Upper Dicker branch of Calories
R Us. Warriors’ captain Nobby Balaclava told us, “This is a bitter blow in the wake of our relegation to the Nuclear Waste Disposal Solutions League (South) last season. The lads are inconsolable, particularly as we had all ordered 4-wheel drive cars and got measured up for Armani suits in anticipation of £200,000 a week salaries and boot sponsorship. It now looks as though the promised Olympic-sized stadium with its own money laundry facilities and jumbo jet runway is not going to materialise, along with the luxury yacht marina and the new away strip.” As we went to press, Mr. Ballycuddy’s telephone number appeared to be unavailable. His caravan, parked in a lay-by
just outside Herstmonceux, was deserted when we called. The FA have cancelled the purchase and given the club 30 days to find a new owner.