Local historian Steve Peak explores some of the ways Rock-a-Nore has been used.

Instead of pumping all our sewage into the sea, why can’t Hastings have a recycling plant to turn it into fertiliser? And rather than ruin the countryside by dumping household waste into holes in the ground, how about burning it and using the heat to pump water round the town? This may sound too futuristic, even for ultra-modern Hastings, but back in Victorian times you would have actually seen it taking place in the Old Town.

Rock-a-Nore became the town’s leading industrial estate in the late 19th century when new sea defences created virgin land for building on. As Rock-a-Nore was a long way to the east under the cliffs, it was a good out-of-sight and out-of-mind area for the councillors who were deciding where to locate unattractive development. Anything that didn’t fit in with the smart seaside image of Hastings was sent to Rock-a-Nore. The construction of the town’s first large-scale sewage works there in 1868 set the tone of the area for many decades.

A mortuary, an artillery battery, an engineering workshop, large stables, a lifeboat house, a military drill hall, an ice-making factory, several boat builders, a tan house – all could be found at Rock-a-Nore, over a hundred years ago.

But most memorable were the sewage manure works and the refuse burning plant.

The borough’s drainage system had been condemned by a government survey in 1850, when the Bourne stream was an open sewer running through the middle of the Old Town, and sewage was being piped onto the beach all along the seafront, including St Leonards. A half-hearted attempt in 1857 to set up some proper drainage proved a failure, so from 1866 to 1868 a much bigger system was created which is still in use today.

At the heart of it was a new egg-shaped main sewer, 6ft high by 4ft wide. This was laid along the seafront from the St Leonards Archway near the bottom of London Road to Robertson Street, then via the town centre to Rock-a-Nore Road. Here a vast new underground tank was built, 210ft long by 100ft wide. It could hold 1.5 million gallons of sewage, two days waste. This discharged down a three-quarters-of-a-mile-long pipe into the sea off Ecclesbourne Glen when the tide was going eastward. Some of this pipe can still be seen, and the tank is still in use, but since the mid-1980s all sewage has been pumped back along the seafront via a new pipe to Bulverhythe, where it goes two miles out to sea.

A complex way of turning sewage into manure had been created by a Midlands company, Native Guano, in 1869, just after Hastings had built this new system. So, a well-known local businessman, James Rock Jr, who ran a carriage building works at White Rock, joined forces with Native Guano and created the Hastings Sewage Manure Company in early 1870. As Mr Rock had friends in the right places, Hastings Council gave Sewage Manure a 21-year lease of part of the new sewage works for just £1 per annum.

By June that year, Mr Rock had erected a large two-storey building, with a 60-ft high chimney, from where Native Guano’s ‘ABC’ ingredients could be mixed with the raw sewage and turned into baggable fertiliser. ABC was short for Alum, Blood (from animals) and Charcoal (made from animal bones), plus clay and various sulphates.

The Sewage Manure Company was undoubtedly a good idea. Why pump sewage into the sea and ruin marine ecology when you could turn it into a useful fertiliser for the humans that had produced it in the first place? Visitors came from around the country to see the pioneering works at Rock-a-Nore.

But unfortunately, the works did not work. The ABC mixture was not perfect, and the company had financial problems, as it did not receive sufficient return to cover its capital outlay of £4,200. Residents in the Old Town were not too happy either, because of the terrible smells coming their way.

The Sewage Manure Company was wound up in 1874. In 1877 Hastings Council converted the building into a mortuary and a ‘Disinfecting Station’ where grubby people attending the workhouse in Frederick Road in Ore could be sent for a good clean-up.

A decade later the Council decided it should do something about the growing problem of waste disposal. Many people were burying their rubbish in odd spots, or dumping it on the beach in the hope the sea would wash it away, while the Council burnt some on the beach at Rock-a-Nore. So why not build a waste recycling plant on the vacant ground on top of the sewage tank?

And this is just what the Council did. In 1889 the new Refuse Destructor (or ‘Dust Destructor’, as it was better known) was built next to the 1870 Sewage Manure Works. It had four furnaces, which could each burn 9-10 tons of rubbish a day. The smoke and gases from this went up a 130-ft-high octagonal chimney, while the heat fired two boilers, the power from which could be used for many purposes. Sea water was pumped round the town for street cleaning, sewer flushing and the then-fashionable sea water baths. A steam-powered stone-breaking machine in the Destructor’s compound created road stone for road surfaces. From 1902 the Destructor powered the water-operated new East Hill Lift – water pumped up to the top went into a tank below the carriage, the weight of which then took it down and pulled up the other carriage. The Destructor also fed steam into the adjoining Disinfecting Station and operated both a mortar mill and a fishmeal plant which produced manure from the fishmeal from the fish market.

All this was too good to last. The Destructor closed in 1937 when the tipping site at Pebsham was opened, along with the intention of creating a municipal airfield there.

After the Second World War, the entire sewage tank area above ground was cleared, except for a small water pump. There are now just a few remnants of the Works and Destructor visible. The clubhouse of the Hastings Motorboat and Yacht Club stands on the site of the Works, and behind it in the cliff can be seen some of the 1870s brickwork. A large sloping ramp in the club’s compound is where the rubbish was taken to be tipped into a pit for the Destructor. A few yards of railway line go up to the edge of the end groyne, for ashes and unburnable rubbish to be dumped into the sea.

And if you look closely, you may find a granite sett laid on top of the end groyne with ‘1878’ faintly carved into it.

• Steve Peak is a local historian, for more see his latest book “The America Ground, Hastings” and  www.HastingsCountryParkHistory.com 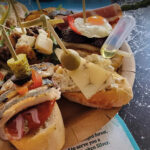 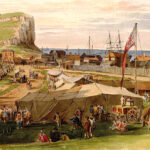