Reading between the lines of Johnson’s latest rambling bag of nonsense, it looks to Lobbytroll like the DUP are in for another massive bribe in exchange for their government support. This time it could be more difficult though, since the minority-supported party appear to want nothing to do with anything even mildly resembling a Northern Irish backstop. The latest compromise appears to involve refundable tarrifs and an underwater border somewhere in the North Sea, (so much simpler than the old fashioned EU method of free movement of goods and people don’t you think?) The whole thing must of course be ratified by all Northern Irish parties, not just Arlene Foster’s gaggle of bowler-hatted Zombies, all this in a country remember, which has now been without a government for two years. The devolved executive and assembly which have powers over the region collapsed in January 2017 owing to ongoing disagreements between the DUP and Sinn Féin relating to the ‘cash for ash’ scandal. All attempts to restore power-sharing have since failed. As the charming Ms Forster puts it: “Anything that traps Northern Ireland in the European Union, whether single market or customs union as the rest of the United Kingdom leaves, will not have our support – the prime minister is very mindful of that.” Troubles all round!

They say that a successful drug peddler never consumes his own product. Tim Martin of Weatherspoons fame appears to be ignoring this advice as he tours his cut-price beer cathedrals, where, clutching a cheap pint, he allows the tory Brexit manifesto to escape from the hole in his big red face, to the delight of his faithful early morning customers. It must also be noted by the way, that in Lobbytroll’s (admittedly limited) experience, his toilets, like his politics are NOT always immaculate.

Don’t string me up here, of course I agree with the point you are making, time is running out, BUT; do you understand what TIMING means? In the current febrile political climate a diversion is precisely what the Boris Johnson gang are looking for, and it is exactly what they got. What would delight the gormless readers of the juvenile gutter press more than amusing old Boris laying into “annoying nose-ringed, hemp-smelling crusties?” Or spitting out Greta Thunberg’s name like it was an accidently ingested dog turd? Prime Minister by appointment Dominic Cummings must have had a right chuckle as he read the next day’s headlines before crawling back into his coffin to dream up some more mendacious soundbites for the children of the night. 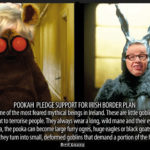 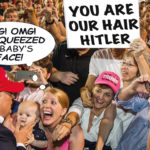