CHEERS
Xenophobe and enemy of the NHS, Nigel Farage, has been comparatively quiet during the 75th anniversary of D-Day, a remarkable feat of taciturnity for a man whose wide beer-hole is framed by such loose and opinionated lips. Was the leader of The Brexit Party, dubbed Newkip, by cynics, perhaps a little wary of the criticism he might receive from the surviving, heroic volunteers responsible for the liberation of Europe? Especially considering his dogged 20-year campaign to have the EU, arguably the greatest contributor to European peace thus far, dismantled.

It would be quite wrong of Lobbytroll to suggest that his silence may have been connected to the fact that in 2017, Farage himself was awarded heroic status after addressing a rally in Germany for an extreme far-right political party. He was invited to the event by MEP Beatrix von Storch, the granddaughter of Hitler’s finance minister, (who has called for the use of “lethal force” against illegal immigrants – including women and children), and after the speech he gratefully accepted a standing ovation. The party The Alternative for Germany (AfD), takes the view that The Fatherland ought to be proud of the soldiers of the Third Reich, and that Berlin’s Holocaust Memorial is a “monument of shame” which should not exist.
Footnote: The current, estranged Mrs Farage is German.

MYSTERY SOLVED
As an obsequious bore, an oily, disloyal creep and an infant-voiced, sycophantic, self-serving, narcissistic agenda-bender, Tory leadership candidate and Secretary of State for Environment, Food and Rural Affairs Michael Gove has inadvertently managed to answer an age-old question: What happens when you give a class ‘B’ person a class ‘A’ drug?

RED, AMBER, GO
It looks as though our dear MP Amber Rudd, judging by the recent hemorrhaging of Tory votes, is in for a thorough pasting at the next general election. Unless a miracle of biblical proportions occurs, her immoral majority (just 346 in 2017’s disastrous electoral misjudgment), is widely predicted to evaporate as the Conservative Party takes a lemming-style leap into the unknown. Could the resulting embarrassment caused by the inevitable loss of her seat have had anything to do with her reluctance to join the unsavoury Tory leadership stampede? 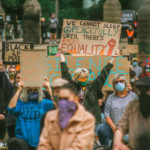