FARAGE BALLOON
Speaking for those he promised to represent by regularly attending the European Parliament, Nigel Farage, privately educated banker, absentee UkIP MEP for South East England and mouthpiece of the working man, has made a surprise appearance in Brussels (something he has failed consistently to do since he was elected). There, the chuckling chancer, who has previously threatened to ‘pick up a rifle’ if he does not get his own way on Brexit, accused the UK Civil Service of being ‘the enemies within.’ As chief spokesman for the cabal of dribbling Brexiteers waiting for their bets to pay off, Farage ought to be well acquainted with treachery, barefaced mendacity and especially the ‘enemies within’ – by whom I mean the garrulous gang of gargoyles who will no doubt quickly become ex-pat ‘enemies without’ once they have cashed in their Brexit chips. 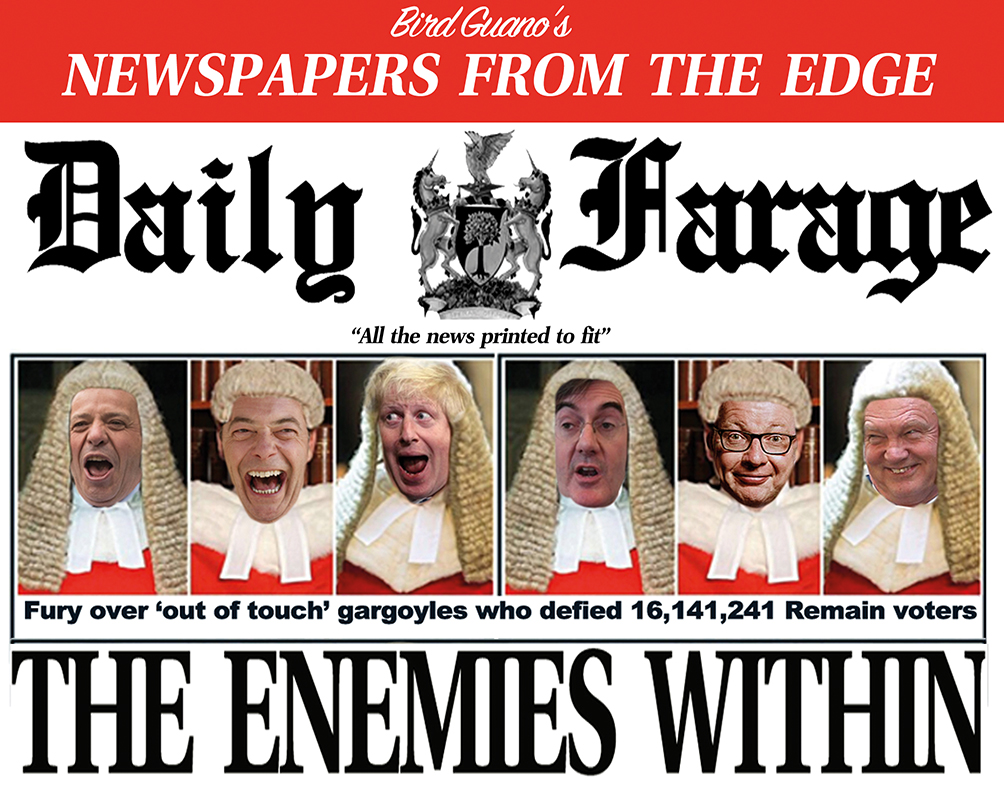 NOT WITH A BUNG, BUT A WIMP
Is ‘the world’s greatest democracy’ being led by a spoilt 12 year-old boy in a fat suit?

President (God help us) Trump has now described the House of Saud’s denials of complicity in the horrifying murder of journalist Jamal Kashoggi thus: “They had a very bad original concept. It was carried out poorly, and the cover-up was one of the worst in the history of cover-ups.” This may well be true, but I suspect the thought of losing all those Saudi billions, sorry, American jobs, is keeping his mind off the far more important issue of golf. Let’s be generous though. The poor incoherent fraud must be in turmoil as hordes of angry billionaire arms dealers hurl their faeces at the whirling blades of the Washington fan.

IGNORANCE IS BLIS [sic]
The terrifying, inescapable fact is that David Cameron’s stupid decision to try and buy-back his party’s vote-drain to UKIP by appealing to the lowest common denominator has resulted in an outbreak of public political discourse shallower than a puddle in a drought. Post-referendum, everyone and his dog is an expert on the ins and outs of import, export, the complex world of tariffs and the myriad forms of trade deals. Canada plus, WTO, Norway-Lite anyone? All this is grist to the grinding pub bore’s mill, and all encouraged by the tattered, post-Murdoch remains of a free press shackled to the dubious opinions of unscrupulous, power-hungry newspaper proprietors and their honours-seeking editors. Before Cameron’s folly, practically no one gave a fliegender fick about borders or the making of laws. The taken for granted notion of free movement has been freely associated by the Arron Banks Fiction ‘n Fantasy Faction with the notion of hordes of job-stealing immigrants and the loss of ‘national identity.’ Pandora’s box has been jemmied open and burgled by a gang of speculators.
The apple has been plucked from the tree of knowledge, and it has a worm in it. Thanks Dave. Where are you by the way, you sniveling over privileged coward?