TRUFFLES AT MILL
A warning to any talk radio broadcaster foolish enough to suggest that deliberately misleading misinformation was the driving force behind the “will o’ the people” Brexit vote; your switchboard will soon be jammed by calls from apoplectic leave enthusiasts, all of them purple-faced at the very idea that they could be susceptible to advertising. They will declare that this is exactly the same as calling them idiots, because they are the last people on earth who would respond to the cynical appeal of professional persuaders and furthermore, how dare you blacken their name etc, etc.

Clearly these umbrage-fuelled and fully informed citizens are iron-willed, and totally resilient to inducement. Unfortunately, they fail to consider an important fact; advertising works. Like a charm in fact, which may explain why the dark art is a world-wide trillion-dollar industry. Of course no-one wants to admit that they can be influenced, or worse, duped, by some smarmy snake oil hustler, which makes their methods all the more insidious, cunning and successful. Political leaders and the business world have always known the power of subconscious persuasion, and exploit it to their advantage. Should the unfortunate talk radio presenter point this out, the angry caller will demand the coronation of Jacob Rees-Mogg, the unreconstructed 1950s toff, whose moral ground is so high it requires oxygen. Mogg is currently leading a cabal of pro-Brexit warthogs known as the European Research Group, a stony-faced, self-interested ensemble, distinguished by appearing to have conducted no European research whatsoever. Q: What do warthogs know about anything other than acorns, truffles and other warthogs? 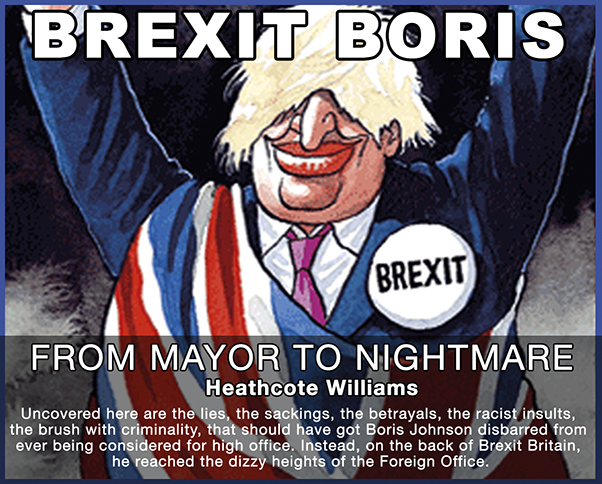 READ IT AND WHOOP
Worse still, Boris Johnson, the clinically obese, lying philanderer is putting himself forward as PM material. J. R-Mogg, a saint in mortal’s clothing, is trying to pass off Boris as the new Churchill. Mogg’s cynically self-serving confidence in Johnson’s leadership is so powerful that he is, in the light of recent events, even prepared to suspend his extinct views in order to help shoehorn the over-privileged fantasist into a position where he can sodomise the UK to the advantage of a few money laundering pirates. “From Mayor to Nightmare” (Publisher: Public Reading Rooms), the meticulously researched and annotated book by the late Heathcote Williams, is the direct opposite of that unworthy cliché “fake news”. It spills the terrifying beans about a man whose honesty, integrity and soul have never existed, except in the minds of those whose interest in politics is a good deal lower in importance than the fascination with their own reflection. If you can read this book and still harbour a suspicion that Boris Johnson is anything other than a low grade charlatan, a barrow boy dealing in fake perfume and a sinister purveyor of smoke and mirrors, then I suspect that you are already dead. https://prruk.org/product/brexit-boris-from-mayor-to-nightmare-2

WHEN IN ROME…
I see that his wholesomeness the pope, who, like most catholic clergy, is something of an expert on sexuality, has suggested that “something can be done” about “childhood homosexuality” – rather hypocritical don’t you think from the leader of an organization which has tacitly encouraged it for the benefit of its members (no pun intended)?