Lucien Pissarro and his Rebellious Daughter

BY Gillian Metcalfe
Lucien Pissarro was born in Paris in 1863. The oldest of seven, he had four brothers and two sisters. His father, Camille Pissarro, was the well-known, hugely influential Impressionist painter, and Lucien was taught painting and drawing almost exclusively by his father, as were his brothers. The children had a comfortable and happy home life, but their father was extremely ambitious for all his sons, determined that they should follow in his footsteps as exponents of Impressionism. Throughout his life he wrote letters to Lucien, which have become an important reference archive for Impressionism.

Although he was indelibly influenced by his father’s technique, Lucien was also under the spell of the Neo-Impressionists, such as Vincent Van Gogh, and of Pointillism, following George Seurat and Paul Signac’s experiments using dots of pure colour to achieve vivid effects of scintillating light. Van Gogh dedicated a painting to his friend Lucien: “Basket of Apples: à l’ami Lucien Pissarro” He also became highly skilled at wood engraving, printing and illustration, admiring the work and ethos of William Morris.

In 1890, his mother, Julie, persuaded him to move to London. In 1992  he married Esther Levi Bensusan, who he had met in an earlier visit,  and they had one child, a daughter, Orovida Camille Pissarro, born in 1893. 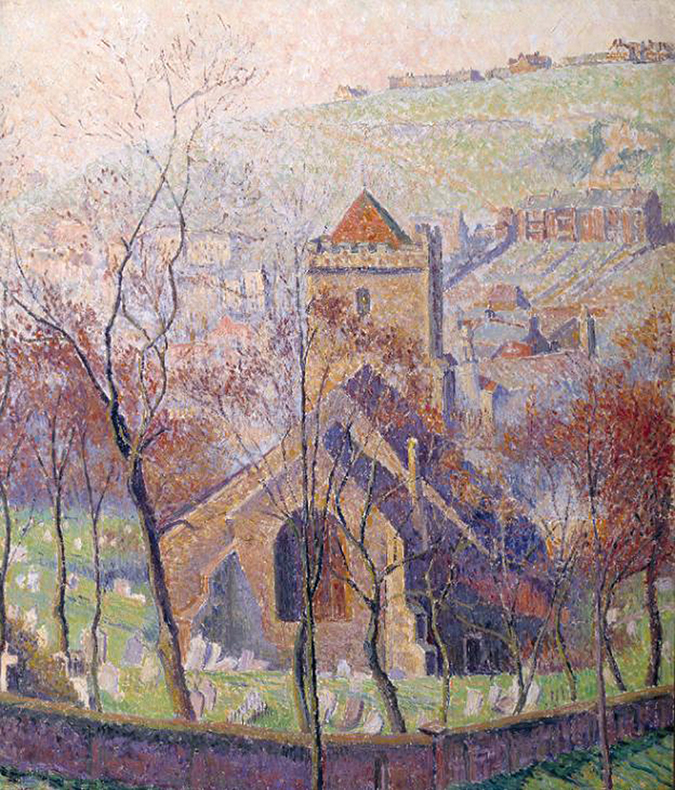 From Camden to Hastings and the Eragny Press
As a member of the Camden Town Group, Lucien was recognised as an important link between followers of Turner, with their exploration of atmospheric light and mood, and of French Impressionism and Neo-Impressionism. However, to his father’s consternation, he  abandoned Impressionism for a time in favour of the Arts and Crafts movement. His work as a printer and illustrator became highly influential on the production of books here in Britain and on the Continent. Hoping to emulate Morris, Esther and Lucien founded The Eragny Press, and this small specialist publishing house produced the finest editions, exquisitely printed and bound. Lucien was more interested in making a perfect craftsman’s object than in its literary content or commercial success. They produced only thirty-two books between 1895 and the outbreak of war in 1914, when The Eragny Press ceased production. (“Eragny” was the name of the large house in France built by Camille and often visited by Lucien and his family). Lucien moved to High Wickham, Hastings, in 1918, probably for his health after suffering a heart attack, and while there he painted some of his finest landscapes.

Lucien followed Camille’s Impressionist style for most of his life; his Hastings view of “All Saints Church, Sun and Mist” is one of his loveliest paintings, showing not only Impressionist but also Turneresque traits, particularly in the treatment of light shining through mist. Painted just after the end of World War I in 1918, we see a view from the East Hill through bare trees. There are similarities with his father’s depiction of “The Red Roofs”, painted in 1877. Lucien has used the same format of viewing the subject through bare trees, which draws the eye to the different layers and angles, and the distance beyond. The church, capped by its red pyramidal roof, stands in a semi-rural setting, distant houses seen through mist on hillsides across fields heralding the beginnings of the great post-war expansion of the town. The well-known sea-mists of Hastings lend themselves readily to painters in the Turner tradition. A shy man, he tried to hide himself and his easel amongst bushes when painting, to avoid having to talk to interested strangers strolling by.

Finding southern warmth at St. Tropez
To escape the harsh winters of England, and to be near his elderly mother, from 1923 onwards, he and Esther rented a small house in the south of France, near St. Tropez. Here at Le Lavandou he painted many landscapes, including “Almond Trees, Le Lavandou”, just coming into blossom. A critic at that time wrote: “England has not always been able to give him the sunlight which his method  expresses best … he returns with evident pleasure to Le Lavandou … Here he has painted the hills in sunshine, the purple shadows of trees, the sea dancing with light, the delicacy of Mimosas, the subtle contrast of Reeds and Peaches. The wheel has come full circle, the young impressionist and the cultured decorator of books … have met in a single individual; …the full expression of a serene and harmonious personality.”

Although he was a highly respected artist, he never achieved the same pinnacles of success as Camille. The arts critic for Vogue once wrote: “… Lucien Pissarro, with perfect filial devotion, has remained faithful to his father’s ideals … laborious technique which cuts out the emotional effects of spontaneity …”  What a burden it is to be overshadowed by a famous father! He was, however, a skilled artist achieving moments of brilliance and recognised as an important bridge between French and English exponents of Neo-Impressionism.
As a modest and unassuming man, he well deserves his place amongst the great and good of Hastings.
He loved England, and was awarded British Citizenship in 1916. He died in 1944. His commemorative Blue Plaque can be seen at 2 High Wickham, Hastings. 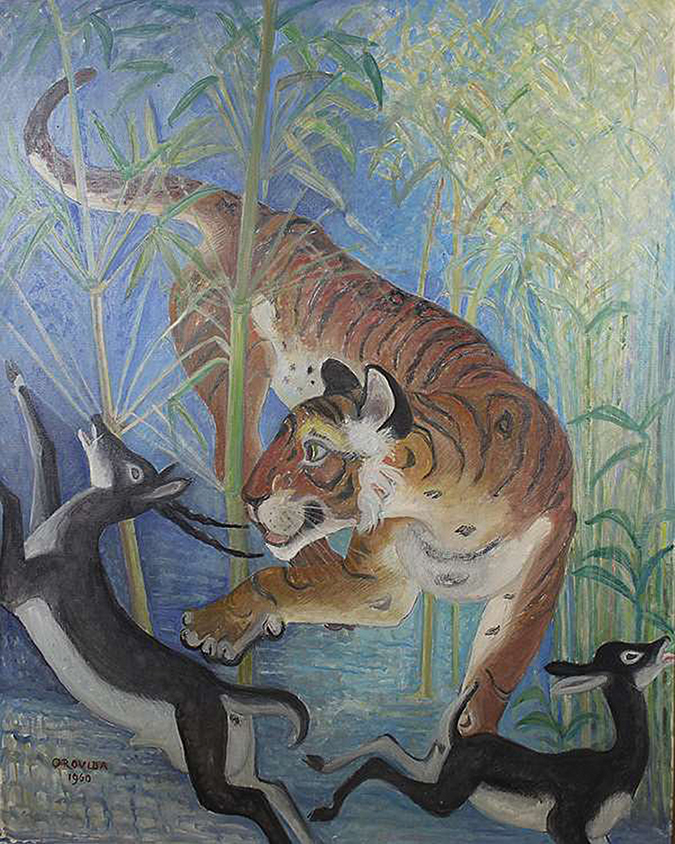 Orovida – a refined rebel
Orovida also became an artist, and, to her grandfather’s  disappointment, she broke away from the tradition of Impressionism in favour of Chinese and Oriental art. She shortened her professional name to just “Orovida”, shunning the Pissarro name, and was a most interesting woman in her own right – the first female artist in this gifted family –  and quite a rebel!

Although born an Essex girl, Orovida lived most of her life in London. At first, her father taught her to paint in the Impressionist style in oils. For a short time she studied with Walter Sickert, but soon abandoned formal art training. In1924, she was influenced by an exhibition of Chinese art at the British Museum and from then on she painted Oriental and Persian subjects –  tigers, horses, Mongolian horsemen, Persian princes and African dancers – in a stylised and linear manner. Thin washes of tempera on silk, paper, linen and gold leaf amounted to a style partly Oriental, partly Western. She exhibited at the Royal Academy, the Royal Society of British Artists and in North America, and much of her work is held at the V&A, the British Museum and the Ashmolean Museum, with many works by Camille, Lucien and other members of this famous family of artists.

In1956, Carel Weight painted her: “Miss Orovida Pissarro” is a formidable figure in a red dress on a red couch, an elegant white coffee pot beside her and surrounded by a portrait of her illustrious grandfather in the foreground and paintings on the walls by Lucien and by Orovida herself. From the age of five she had shown great promise and in later years she did return to a more realistic style, though with modern influences. There is no doubt that she was a fine decorative artist.