Born in 1911, Kitty had car racing in the blood. Her father, Bill Brunell, was a well-known motorsports photographer and pictures taken by him in 1926 show Kitty, then 15, as a mechanic. Her first recorded race, when just 17, was the 1928 Monte Carlo Rally driving a Delage.

“In 1929 Talbot (a British car maker) was so impressed with Brunell’s driving and design skills that a coupe named ‘Kitty II’ was built especially
for her,” writes Institute of Mechanical Engineers’ archivist, Karyn French, adding, “it had a sunshade to protect her hair from sun bleaching or rain…”.

Brunell used the iconic Brooklands racing circuit in Surrey to tune her car’s engine and suspension for the demanding rally stages and raced again at Monte Carlo before turning to competing in British events in MGs. Sadly, her name then drops from the racing lists. In 1937 Brunell a married fellow racer in Marylebone. The extremely wealthy Kenneth Hutchinson, who lived for a time at Headley Grove, Farnham, former home of Sir Malcolm Campbell.

Kitty tunes the engine of her AC

“Throughout his competition career he had the constant support of his charming wife Kitty Brunell… [with] blonde curls who enjoyed jollity… and was as keen on long-distance exciting motoring as Ken,” wrote their mutual friend and automobile enthusiast, Bill Body. “Kitty knew almost all the drivers and was great fun. I went to lunch… [and] still remember the Siamese cats and the wonderful chocolate pudding served by the maid.”

‘Kitty and Hutch’ subsequently toured Europe in a Mercedes-Benz and are buried together at Montecatini alto Cimitero. Kitty died in 1993. 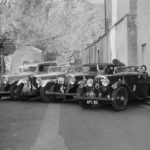 When Women Racers Came to Hastings