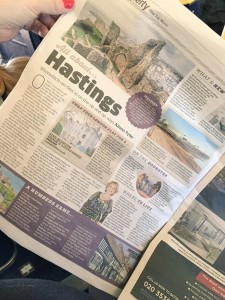 I’d like to briefly pen this response to your article on the 23rd January All About… Hastings – Shoreditch on Sea is on the up and up says Alison Taylor.

It may surprise you to hear that many people in Hastings are starting to discover London. Until recently overlooked as Paris’s deformed and culturally bereft cousin, many people in Hastings are starting to look at London for day trips. Like Milan but less relevant to the fashion industry, London offers many attractions for long weekends away from the coast without the hassle of going abroad.

Local readers should know, if concerned, that you will not experience the same indifferent, bordering on hostile, interactions as you would with Parisians. Never fear, in London you’ll feel the full force of a certain level of obtuse apathy that’ll delight and amaze. People don’t so much avoid human interaction, as it’s just not really important one way or another.

So why not swap your 5 bedroom grade II listed house for a London flat?

For those travelling the other way, Failed in London Trying Hastings (FILTH) as the parlance goes, there are a couple of things to bring to your attention. There are multifaceted social challenges being played out in the town. Caused partly by; a decline in seaside tourism in 1970s UK, a lack of alternative economies, low employment and a long delayed regeneration towards prosperity.

Recently we have managed to foster a cultural regeneration; the communities native to, or at least well established in, Hastings are enjoying a fashionable boon and artistic renaissance. We would like to keep what we have created.

Buying a second home in Hastings inflates house prices, spoiling the rejuvenating economy through a gentrification process that will lead to local people being priced out of their own town. This is why we do our best to deter cultural migrants from London seeking a place by the sea to spend more time with their money.

If you want to live in Hastings please think about the impact on the community that will eventually, begrudgingly, and through a system of hazing, accept your presence after a few short years.