No, it’s not 2018. It is the year 114.  According to the calendar of Aleister Crowley, the ‘wickedest man in the world’, whose last years were spent in Hastings.

This date is calculated from his receipt of the ultimate divine revelation from the spirit Aiwass. Where Moses had tablets of stone, Crowley, more modern, inscribed his on paper with a Swan fountain pen. Crowley hoped he would be remembered for the religion he founded, which he called ‘Thelema’ or sometimes ‘Crowlianity’.

‘Crowlianity’. That has a familiar ring, doesn’t it? It sounds like a religion you’ve heard of before.

Had this happened, there would have been international pilgrimages to Hastings, the final home of the prophet. Instead, you can find his name on a pub.

In his lifetime, he was notorious.  But he saw himself as ‘the Prophet chosen to proclaim the Law which will determine the destinies of this planet for an epoch’. As such, he claimed he ranked with Moses and Mohammed. How did he come to believe this?

Not, he claimed, through his own agency. It had transpired because he had submitted himself to the instructions of his wife – and the god Horus.

His wife? Crowley’s opposition to any sort of emotional or psychological oppression was not merely a selfish driving force: it was also a social creed. When he met Rose Skerritt, an attractive, flirtatious widow, he was moved by her plight. She was romantically attached to a married man. To stop the affair, her parents had coerced her into consenting to marry a strikingly boring American. On the one side, love; on the other, control and oppression. Crowley was outraged.

How Rose became the mistress of the masters of the universe
Baldrick-like, he devised a cunning plan. He would marry her himself. The marriage was to be completely a sham; after it, he would live separately, leaving her free to pursue her affair. This was the scheme he put to her. As he was a mesmerising talker, and Rose inclined to compliance, she agreed.

Learning of the marriage, her parents were furious. To discuss this, Rose and the highly sexed Aleister met in a hotel, after which the marriage was no longer in name only. Whisking her away, he took her to Egypt where, impressively dressed in magical robes, they spent a night in the King’s Chamber of the Great Pyramid of Giza. There, by conjuring the spirits,  he produced the luminosity of intense moonlight.

Even so, Rose was not in the least interested in the magical side of his life. But she did agree to accompany him again, on March 14th 1904, to the Great Pyramid, where he hoped the sylphs would manifest themselves. What happened was of more significance. In a kind of trance, Rose announced, “They are waiting for you.” By the 20th, she had communicated that a new era had begun. Then followed a flood of spiritual signs authenticating these messages, culminating in a requirement that Crowley present himself at the Temple of Horus at exactly twelve o’clock and leave at one on the 8th April, and on the two subsequent days.

These events convinced Crowley that Rose was the mistress of the masters of the universe. At twelve, the voice of Aiwass, whom he regarded as his Guardian Angel, began to dictate to him the first part of what he was to call ‘The Book of the Law’, following it up with parts two and three on subsequent days.

‘Do what thou wilt’ – how it worked in practice
The central tenet was ‘Do what thou wilt is the whole of the law’:  the principle underpinning his life. Superficially, it could be taken as a justification for lust and licence but for Crowley, self-acceptance would lead to self-actualisation and enlightenment. Released from repression, the self would grow away from convention and cruelty and towards love and kindness.  This faith in the self was to be found thirty years later in Carl Rogers’ Person-Centred therapy. As lived by Crowley, these fine aims were often submerged beneath hedonism,  heavy drug intake, and egotism.

Strangely, Crowley was very reluctant to make much of the revelations of his religion. Later, he was not only to publish them but to set up a commune at Cefalu in Sicily  to put these principles into action. The consequences were calamitous. He was effectively deported and, back in England, the Express published a series of lurid stories about orgies of sex and drugs, evil magic, bestiality, and cruel sacrifices . There was truth as well as sensationalism in these accusations. Instead of being respected as a prophet, the result was the confirmation of his image as ‘the most evil man in the world.’

Had the plan for Rose been a clever stratagem? We know that Crowley the polymath was a very clever chess player: was Rose a pawn in his game? How much credence can we give to his account of how his religion was revealed to him? Much of its content owed a debt to Rabelais and Pascal.

Crowley and the Hot Rods
On the deepest level, Crowley, I think, was genuine but not entirely genuine. Enormously talented but enormously flawed. Often ahead of his time but morally backward in his attitude towards women. A narcissist, with psychopathic features. Courageous to the point of recklessness. His image adorns ‘Sgt. Pepper’ and he was a hero to the hippies.

Was he ‘the most evil man in the world’? You can argue that even after his death, he was not to be trifled with. The rock band, Eddie and the Hot Rods, had a top ten hit with a song based on  Crowley’s religion entitled ‘Do Anything You Wanna Do’. They put a picture of Crowley on the cover, but with the addition of Mickey Mouse ears.  Shortly afterward, their lead singer committed suicide. They were dropped by their label. Their manager became hooked on heroin. They never had a hit again. Every member suffered misfortune. In the music business, this is called ‘The curse of the Hot Rods’. It would be more accurate to call it ‘The curse of Crowley’. 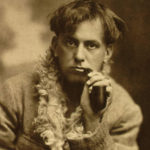 The Beast of Hastings – Aleister Crowley #1