The Black Lives Matter protests have triggered a massive political movement in the USA, but have also found echoes right around the world. What has it got to do with Hastings? Some white people object?
To them we say, why not listen to the experience of black people who were born and live around you? Graham Howard posted this comment on his Facebook timeline and it gained a lot of likes and supportive comments from his immediate friends and family. HIP thought it deserved a wider audience.

Since the murder of George Floyd I have been struggling to process everything that has been going on. I have struggled to go to work to face people and do my job.

Why? – I hear colleagues say, “I let it go in one ear, and out the other. Concentrate on your family. Just don’t look at social media.” I also hear people say things like, “I’m not racist, I’ve got black friends,” or “I’m a minority too.” (We work in a predominantly female profession, and they are white and male.) I hear, “But all lives matter!” followed by “Racism doesn’t happen here!” or “George Floyd’s death was a long way away, so why are people protesting in Hastings?” I also hear, “We shouldn’t talk about race, Graham, you look out for racism because you’re black, you’re being sensitive.” Some say, “There will be a second spike in Covid-19 because of the BLM protests,” but aren’t interested in how well the demonstrators organised the social separation.

It makes feel sad and unsupported.

I’m Graham. I was born and raised in Hastings. I am black. I became really aware of my colour and racism at school from Year 7. Some terrible, awful things were said and happened to me. It was not dealt with by the school or by the community very well. Maybe that was because I was the only black child in school for some time and probably one of very few diverse faces in town.

People say all lives matter – which they do – but when a black life matters less, I don’t believe that is equality

My job is stressful and involves long hours in intensive hospital wards. So it’s good to get home and spend time with the family. I adore my wife and we have three children together, including the baby who is only six months old. Family time means cooking together, and a favourite trip out is visiting the Old Town Aquarium. I don’t see how I’m that much different from other residents of Hastings.

My skin tone was different to the majority. That’s it. Yet I endured discrimination in various forms because of that one fact. This affected my self-esteem and confidence. I felt I was worth less than the next person due to how the school and wider community dealt with the discrimination, and the way they dealt with it was to play it down and not acknowledge what was happening.

My mum told me to rise above it and be strong. She’s a strong woman who responded to the request from the NHS to come over here from the Caribbean in the 1970s, part of the Windrush generation. I tried as best I could to follow her lead, with a realisation that I wasn’t seen as equal due to the amount of melanin I have in my skin.

Many saw me for me, Graham, and didn’t have an issue with my skin tone. However, I still experienced racism and have felt oppressed but didn’t speak out. I just put up with it quietly.

Moving forward in time, I went to college, university and completed post grad education. I still experienced various forms of racism and, again, nobody called it out and said it was unacceptable. Neither did I. I just put my head down and put up with it.

I’m now 36 years old and it’s 2020. I am a husband to an amazing wife. I am a father to three amazing little children who are the next generation and I don’t want them to feel as I have felt or be denied opportunity because of the colour of their skin. I work for the NHS and have worked through the height of the Covid-19 peak.

I still experience nuances of racism to this day at work and in the community. The way this racism is delivered is with finesse and stealth and the oppression is so skilled and micro it’s dismissed and people say I’m being sensitive. This suggests to me my black life doesn’t matter as much without saying it directly.

I can’t tell you how many times I have been pulled over by the police or how many times I have been stereotyped or followed around a shop by security and asked, with a telling tone, “Can I help you?” Racism has also affected a lot of aspects around my career right up to the present. I have been on management courses to prepare for the next step, then have had to watch while less qualified white people overtake me time after time.

Racism is more deadly than Covid-19. It’s about time people realised that. Black people are four times more likely to die from the virus. We know this, you know this and that in itself also paints a picture and says something about equality and different situations in life. We may all be going through the same storm, but the boats we shelter in are not the same.

As a nurse I am disheartened that people are using the NHS as a reason to disagree with the protests.

I ask the question, you may state you are not racist but are you anti-racist? I don’t agree with violence and the Hastings protest went ahead peacefully, with social distancing and as safe as many others on social media, but they’re not the ones that get on the news.

Some people made comments about other protests: people said they were more angry and upset about the horse that bolted and the police staff member that came off the horse, or the oppressive statue of Colston in Bristol being pulled down (he who made his fortune off the back of the profits gained from the slave trade in the 17th century and helped build schools, churches and homes for the poor – charity that cost black people’s freedom). In those comments no real regard or attention is given to the reason why these protests happened. Using Covid-19 as an excuse to rebuke the protest movement makes me start to question things on many levels.

Agreed, protests and gatherings are not ideal during a pandemic. Violence is also not the answer, but when IS a good time to stand up? And how? This has been going on too long. The racism, hardships, and subtle nuances of discrimination are real. I have experienced them all my life and still do to this day. They affect me and I try to shield my young family from the effects of them. I feel my black life doesn’t matter and there is evidence to support that. People say all lives matter – which they do – but when a black life matters less, I don’t believe that is equality, that isn’t showing that all lives matter, that’s showing that some lives matter more than others.

George Floyd’s murder was the last straw and it was caught on film this time and has shaken so many people. Dismissing what happened and saying it didn’t happen here, is sending a message that it is okay and it really is not okay. The time has come, we really need equality, not token gestures but true equality.

If you agree with racism and you stay quiet and allow it to continue using the protests and Covid-19 as a smoke screen, then I will know where I stand with you. Or make a stand against racism and call it out, not just today but tomorrow and in the future and forever until it stops. We need to start now to empower the next generation to embrace diversity, equality and inclusion so people don’t need to protest about it in the future. 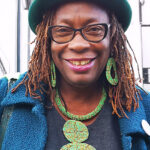 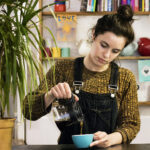