Tom Hunter’s photographic portraits of Hastings taxi drivers are brimful with tenderness and empathy. They celebrate the deep inclusivity of our coastal town and sensitively blur the seam between the museum’s more traditional collection of landscape paintings and the contemporary issue of the international displacement of people. He casts his subjects as divine players in shots that recall the great Pre-Raphaelite masterpieces such as Millais’ ‘Ophelia’ or Waterhouse’s ‘The Lady of Shalott and in doing so, he elevates taxi drivers to an almost celestial status.

It is perhaps cruelly ironic that the vast majority of taxi drivers who see us safely home after a night of revelry or an exhausting weekly shop are themselves a long way from their true homes. Increasing numbers of them have had to flee their culture and migrate to our shores only to find themselves in the role of endlessly ferrying others from place to place. This bizarre twist of fate resonated with Hunter at the outset of this project. He explains how our interactions with taxi drivers are usually characterised by fleeting and superficial conversations with a ‘back of a head’; but that if you take the time, he says, you discover that each driver has a fascinating backstory infused with tenacity, compassion and dignity. This is what he wants to express in this work.

The golden hour
All the photographs are taken during the hour before or after sunset and, more significantly, at locations defined by the subjects as their favourite places in and around Hastings. The ‘golden hour’ is in itself a transitional time of day, neither day or night; a time in between worlds that deepens the idea of displacement. As phases of the day shift, so does the identity of the subjects in the photographs. As well as providing a godly glow, deeper colours and dark long shadows that give definition and clarity, dusk signifies the calm acceptance of inevitable change and confers a sense of nobility on those depicted.

It is with privilege that we take in these photographs; we see these hard-working drivers in places which they have come to love, where they share the echoes of melancholy and longing they feel for their homelands. In some images the subjects are in deep contemplation, in one over a dead pigeon, in another holding a stalk of rapeseed flower. These images give us the fleeting feeling of being a voyeur, of being privy to a moment of private reflection. In one or two the drivers acknowledge our gaze with an eye-to-eye challenge which is firm yet benign.

These images have added power because they show the itinerant drivers at peace with an aura of permanence and stature, in spite of having spent most of their lives dogged by transience and uncertainty.

The exhibition is made better by the work being interspersed with examples of the museum’s permanent collection of landscape paintings and audio recordings of the taxi drivers speaking about their move to and experiences of Hastings. An interactive feature which enables you to search more deeply into the places in which the photographs have been taken, by way of the museum’s artefacts and archive materials, also provides depth and invites us to consider the subjects themselves as part of our town’s history. 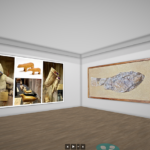 Looking at Things: A virtual show to make you look closer

Hastings Museum is ‘Good to Go’

« 1981 And All That
Creative New Support For Carers Launched »