Over 50 artists have pledged their original artworks for an online auction from 16th-26th September. The auction, to be held via eBay, will raise money for an electric wheelchair for fellow artist, Esther Fox. The campaign Wheels For Fox Sake, has already raised £12,000 towards the target of £14,000 and the organisers hope that the auction will make the wheelchair a reality.

The auction will be ‘secret’ in that all works will be anonymous and the individual artists will only be revealed after the sale. Many artists who are contributing have significant profiles, with works featuring in public and private collections. Also a large number live and work in Hastings and St Leonards.

Works span styles and influences from graphic novels, tattoo and graffiti art, through to conceptual work and watercolours, capturing nature and the world around us. The diversity of the work on sale really provides a huge range of choice for any buyer – and you never know, you might be buying an extremely collectable work. The beauty is that it is secret, you just buy what you love. There will, however, be clues along the way, as the contributing artists are being featured on the Wheels4foxsake Facebook page #wheels4foxsake and on Instagram @wheels4foxsake. The works will be posted separately through these social media channels in the week leading up to the auction to give buyers an idea of what is available.

Esther Fox has a muscle-wasting condition which means she uses a wheelchair. “I’ve been overwhelmed by the huge generosity of my fellow artists to donate to this cause,” she says. “It’s really highlighted what a privilege it is to be part of an arts community.”

She explains that although she has worked with some of the donating artists in the past, there are others that she has never met or been aware of before: “It’s this readiness to give their work which has been so profound.”

She points out that the nature of creating art is something that takes years of commitment, effort and skill: “It’s this ‘practice’ of making art that sits behind every individual piece, which is why donating a work is more than just giving one piece.”

Esther has exhibited widely including at The Science Museum London, The Towner Art Gallery Eastbourne and at SICK! Festival at the Lowry in Manchester. Esther is also a trustee for Hastings Contemporary.

• Find out more about the campaign at  gofundme.com/f/e9w5h-for-fox-sake; on eBay search for wheelsforfoxsake.

• You can also find out more about Esther Fox www.appleyardfoxart.com
and on twitter @AppleyardFox 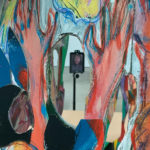