Leah Levane provided an eyewitness account of life in the occupied Palestinian territories in a meeting in Hastings recently. The meeting was organised by Hastings Against War and also featured a short performance by local singing group Las Pasionarias. Leah was one of 130 Jewish people, mainly from the US, who visited Hebron in May of last year. One of their aims was to restore a Palestinian family to the home they were evicted from twenty years ago.

The destruction of Palestinian rainwater harvesting cisterns has also been documented by Amnesty International in its report, ‘Troubled Waters – Palestinians Denied Fair Access to Water’.The report put average daily Palestinian water consumption at 70 litres a day compared with 300 litres for Israelis. It details how some Jewish settlers in the West Bank have sufficient water for swimming pools while Palestinians can struggle to access enough for basic needs.

Jewish people are very active within the global movement supporting the Palestinian people. The delegation Leah Levane took part in was from the Centre for Jewish Non-Violence which, in its own words, ‘brings Diaspora Jews to Israel to stand in solidarity with Palestinians in non-violent action against the occupation’.

The attempt to restore the Palestinian family to their home proved successful. The family were evicted from their home – a converted cave – in 1997 but thanks to a massive team effort, were able to return to their dwelling and are still living there now.

Leah urges people to visit Palestine. “You’ll be warmly welcomed.” she said. “Have a fantastic holiday. Stay in a hotel.” She recommends that people read up about Palestine and mentioned ‘Haaretz’ and ‘Mondoweiss’ as sources of information. Leah also suggests fund-raising for Medical Aid for Palestinians, which provides health services and emergency assistance in Palestine.

On Sunday 18th March Hastings Against War will stage its annual Fly Kites Not Drones,
an international action, begun by young Afghan peace activists, which highlights the fatalities and injuries caused to civilians by armed drones. Kites will be flown from 11.00am on Hastings seafront opposite the Carlisle pub. Kite flyers of any ability are welcome. There will also be a kite making workshop on Tuesday March 6th starting at 7.00pm at the Quaker Meeting House, South Terrace, Hastings. 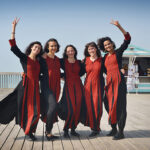 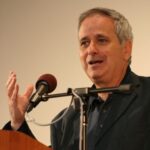 « No Winter Sports – We’re From Hastings
How Sweet is your Love? »