The article about HEART Hastings Emergency Action Response Team (see column above) talks about working with “a host of
other organisations”. Here are two that have emerged to help.

Heather Leat is a supervisor in the costume design industry. She lives and works in London but is a regular visitor to Hastings and the costume-making community here. Like other people around the country, she saw a need for suitable protective clothing and came up with a solution – get the Hastings costume design community involved.

She set up a GoFundMe account, Scrub Up for Hastings & St Leonards!, and with the help of local costume-maker Jane Grimshaw, set things in motion. With theatres and film sets closed down, the community of costume-makers were able to channel their energy into hospital scrubs. As Heather says: “They’re used to making complicated designs, problem-solving and setting things up quickly – so ideal.” The original core of eight costume-makers has now grown to include people with the necessary skills from other local areas, such as Bexhill, Northiam and Rye.

With £7,000 already spent on 1,300 metres of fabric so far, Heather ensures the supplies keep flowing. Three hundred sets of scrubs have already been made and are due to be delivered this week. They are supplied on request to NHS workers, with current demand focused on GP surgeries.

Apparently, supplies via normal routes will only be available in mid to end of May, so this cottage industry will be filling in a shortfall over a six-week period.

Scrubs off to Warrior Square Surgery

Giles Duley is a photographer who has worked in many conflict zones and runs a charity called The Legacy of War Foundation which believes in “direct and positive action to create lasting and meaningful change”. He’s used to working in a crisis and wanted to use his skills in the local community. He set up the Hastings Supports our NHS staff Facebook page and has been busy doing just that. Among other things, he has sourced vital personal protection equipment for staff at the conquest hospital and has set up a free taxi service to take NHS workers to work – using volunteers via HEART – currently doing about 100 journeys per week.

He, in turn, makes use of other individuals such as Katharine Wallinger, a milliner turned facemask-maker, who donates money from those she sells to the organisation.

Giles has a particular affinity with hospital staff, as he spent time in a hospital in Afghanistan. It was there that he became acquainted with their real needs. For example, wearing scrubs and washing hands can lead to chapped skin, so he managed to source 40,000 sachets of hand cream for the staff at the Conquest.

As he points out, the Covid-19 pandemic is a global problem that requires a global solution, “but is also about communities working together”. 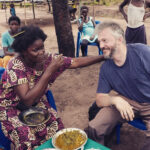 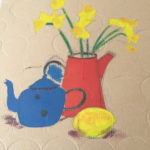