Not Just an Award-Winning Shop

Articles in the national press about Hastings always cause a stir on social media, and when three local stores got into the Times List of 50 Best Independent Shops in the UK, this was no exception (Sunday Times 16 January). The High Street in the Old Town is known for its upmarket shopping and it’s no surprise that two of the shops were from there, AG Hendy & Co – that should need no introduction – and more of a newcomer, Hawk and Dove, chosen for its “unique selection of goods”.

Little Mashers in Kings Road St Leonards, taking the prize for childrenswear, could be seen as less obvious; that is unless you’ve actually been in the shop and talked to the owners Clare and Andrew. They have an unusual approach to retail, with most of the products “geared around an experience” – which is why they put children at the centre of everything they do, including running workshops that involve the local community. “It’s where we get our inspiration,” says Clare, who is also full of praise for the town and how it facilitates community involvement: “This town is unique,” she says. “There’s everything here for creative businesses to flourish.”

Exposure is still important, of course. Asked how the Times list has helped promote the shop. Clare says they have had more feedback from the article in the Sunday Times Style magazine than from anything else: “The more the town knows what you do, the more they understand you and support you.”

But their market goes beyond the town, which is why they produced a short promotion film (tinyurl.
com/ycxzcmhk) last summer to enable buyers, both national and international, to see what they do. “We wanted a video that showed our products in the clearest possible way.” says Clare. “Then people can say ‘I get it’.” How else to explain things like glow in the dark T-shirts?

So what is there to get? Most importantly Little Mashers is not just a shop on Kings Road, St Leonards; their products are stocked all over the world. They particularly mentioned Camp, a children’s shop in New York as being a place to get the products noticed, as Clare says: “It’s particularly influential as it was one of the first ‘concept’ stores for kids.” And closer to home, their products are also stocked by the National Trust, not just the website but also in about 15 specific gift shops around the country.

The next question is how to operate as a small business supplying a big market. That’s the dilemma as Clare says: “I don’t really want to have a massive company.” But as things stand, they are able to keep up with demand even though the products are handmade. That’s because, like in all retail, there are peaks and troughs, with Christmas a particular peak. So they still have capacity throughout the year for expansion. And as Andrew says: “We’re very efficient in how we operate. We’re in total control of all production. And that’s how we like it.”

But on the other hand, they came to Hastings to be part of the community. So there is a balance to be struck. Clare says they want to get into doing more workshops – as they did before lockdown. In fact they plan to set up a ‘print club’ every Wednesday. And although they get inspiration from working with kids, there’s more to it than that. “It’s also about the way arts education is gradually being squeezed out of the curriculum.” says Clare. “So it’s about offering kids some creative output. We came up with Print Club because print in schools is not really covered. We get kids in from all sorts of backgrounds, and they love what they do.” Or as Andrew says: “It blows their mind.” And that’s from 4/5-year-olds up to teenagers. “We do stencil work with the kids, and they do these tentative little things, and then they print them – and it’s like, bang!”

The first Workshops will be starting during half term so book your places now! Monday 14 and Wednesday 16 February and then the Friday Mashers take over at Tommy’s Pizzeria on the 18th – Pizza, printing and music (DJed by Andrew).

• Contact [email protected] for details and bookings of the upcoming workshops. 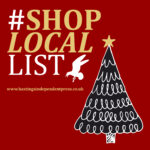 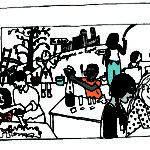 Return of the Fun House Festival