Stretching from Warrior Square to within a few feet of the oldest pub in St Leonards, Norman Road used to be a vibrant shopping street complete with an active church, a car showroom, a cinema – and a Russell & Bromley! But back in the 1970s, things started going downhill: and continued downwards.

The St Clements restaurant, just off Norman Road, was reviewed in 2007 by Jay Rayner.  He wrote a glowing review, but he also commented: “If, as Keith Waterhouse once said, Brighton looks like a town that is ‘helping the police with its enquiries’ then St Leonards-on-Sea looks like a town that has been convicted, done the time and is now out on parole.”

It was only recently that things began to pick up. The car showroom is long gone, the church is now residential apartments, Russell & Bromley is a grocery store – but the Curzon cinema, closed in the seventies, reopened as the Kino Teatr in 2014. Norman Road soon developed a character described on the ‘Cool Places’ website as ‘St Leonards’ buzzy hub’, a parade of contemporary galleries, quirky cafés … and independent shops selling everything from hip homeware … and vintage furniture to haberdashery and dog treats.’

But the buzz was intermittent and sometimes indistinct: until now that is. Although the Love Café, opened in 2008, was a popular destination that regenerated the corner opposite the Post Office, it took its reinvention as Tommy’s Pizzeria to start making the street a go-to destination for the whole of Hastings and not just the local area (click here).

And the momentum is building as Norman Road gets its own dedicated music venue, The Piper, with its grand opening next Saturday (click here). There are rumours of a pod hotel opening off London Road – is this to accommodate the rush of visitors to a newly energised St Leonards? 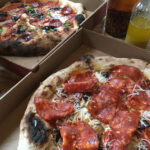