Artist Georgie Wheeler has an eye for emotional drama. While her pieces often have various characters irritating, fighting or falling in love with each other, she had to think outside the (BT) box for her most recent work.

Inspired by the conflict and emotional drama with which she likes to infuse her work, Georgie has created two designs that cover the BT boxes on the corner of Burton Way and Undercliff in St Leonards. Georgie ’s creations are part of a series of decorated boxes supported by the Coastal Currents Festival.

The first box confronts us with that all too familiar Hastings staple, the seagulls, locked in eternal conflict with some desperate-looking chips. “It had to be visually strong, it had to be quite amusing and it had to relate to Hastings,” she says.

“I like the idea of them almost being one against the other, because they’re obviously not at all,” she says. “But I thought it could be quite controversial, you know, ‘which one do you prefer?’”

When it came to public art, Georgie was inspired after watching a documentary on American street artist Keith Haring. She was inspired by the connected approach he took to his art practice. “It isn’t just ‘sit there, practice your art and hope you can sell it’. You have to live and breathe your artwork and your brand.”

The documentary got her thinking about public art and having something she created on display in her local area. She went full time as an artist last August, after teaching art for 13 years. “It was a little bit scary because I love structure and I love routine, obviously being a teacher for so long”. But she found her way around it by keeping a list of what she wants to achieve each month and works her way through it. For example, for the month of May, she’s been drawing a bird a day and donating a third of the proceeds to charity.

• You can see a full video interview with Georgie Wheeler on the HIP Facebook page.

• Read about other Interesting People here 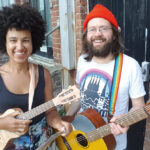 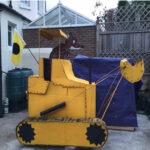 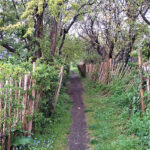 Not too Late for National Walking Month

« Punk, Plastic and the Pier