Drumming Is Good For You

According to NHS England, “one in four adults and one in 10 children experience mental illness” in this country. HIP discusses the benefits of drumming with local drummer Julian Humphries.

Julian started drumming while visiting West Papua on the island of New Guinea – at 16. He says he bought a drum and just sat on the beach annoying all the locals! Drumming was originally a fun way to show off: “I liked the fact it was loud and had few barriers. You could just pick up a drum and make a fantastic sound and get people moving.”

“These days it’s just part of who I am,” he says. He loves the feeling of creating something together and “the feeling of unity when things fall into place” – and that’s where drumming and mental health comes in.

Julian comes from a family of teachers, so teaching is in his blood. It wasn’t long before he was being asked to run drum workshops with “some pretty lively kids” at a youth centre up in Ore valley. These sessions gave the group a focus and a channel for their energy. “It seemed to empower everyone and build confidence… everyone working together… depending on each other.”

He feels that drumming works on many levels: it’s physical and gets the blood flowing; it can be expressive, and a great way to channel emotions and release tension; it’s meditative – a tool for clearing the mind. And, he says: “In a communal way it’s great for breaking down barriers and creating a sense of belonging. All of which is great for one’s mental health.”

Julian recently took part in a study on drumming and wellbeing funded by the Royal College of Music. “They took a survey of their wellbeing before and after the project and the results were stunning.” Nearly all the participants reported an improvement in their state of mind, their focus, confidence and general well-being.

He also sees it in the day-to-day work he does with adults. “People arrive carrying a weight with them,” he says. “You can see it in their body language and hear it in their voices. But after its just all gone, there’s a buoyancy to people and a sense of calm too.”

For Julian it’s like a daily meditation. If he falls out of the habit of doing it regularly, he says he gets a bit tetchy. “These days its feels like it’s just part of life, but drumming has definitely helped during some tricky times.”

• If you are interested in joining a community drumming group you could visit the websites of local groups Sambalanca, Section 5, Stix, Skulldrummery, The Drumskullz. If you want to learn to play the drums you could visitmusicteachers.co.uk There are also groups such as The Sussex Drum (thesussexdrum.com) who work with the “empowering and liberating aspects of rhythm”. 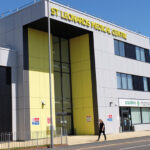 GP Appointments in Hastings: A Survey 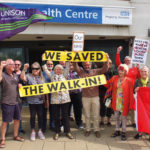 « FESTVAL BY THE LAKE 2019
Penalties For Parents Cancelled »